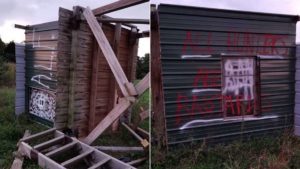 Multiple deer stands in Wisconsin’s Dunn County have been vandalized in recent weeks, tipped over and spray painted with messages like “Hunt the Hunters” and “All hunters are bastards.”

“A.L.F.” and the logo for the radical anti-hunting group Animal Liberation Front has appeared on some stands.

The Animal Liberation Front told Fox News in a statement:

“The North American Animal Liberation Press Office was very pleased to hear about the destruction of multiple hunting stands in Dunn County. It is an absurd idea that there is sport in lying in wait for an unsuspecting animal to stroll by and then blowing it away with a high-powered weapon. People who do this sort of thing are despicable and need to be stopped.”

The activists also damaged or stole several trail cams that might have caught them red-handed vandalizing the stands.

That the ALF and similar groups are lunatics and criminals is obvious and has been for years. But the takeaway here is that hunters in and around Dunn County and any area in the country where there has been similar anti-hunting vandalism need to be vigilant– check all box blinds and tree stands before climbing into them and hunting this season.

Do not put it past these lunatics to cut straps, saw brace boards or otherwise sabotage stands so that they might fall and injure or kill hunters.

In Dunn County, authorities are urging anyone with information into the crimes to contact the Sheriff’s Office, which is working with the Wisconsin Department of Natural Resources and FBI.