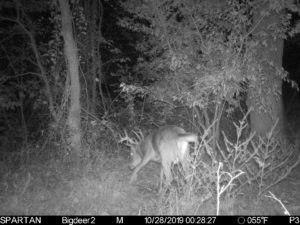 Bucks scrape at night, you know that.

Every study on scrapes conducted over the past 30 years has confirmed it. One major study in Georgia, considered by many to be the ultimate research ever conducted on scrapes, found that 90% of scrape visits occur at night and, get this, the most active time at scrapes is between 2 and 3 a.m.

Hunters always figured bucks do it for the safety factor—cover of darkness and all–but one of the country’s foremost whitetail scientists has a different take.

Dr. Karl Miller, who for years was the head man at the University of Georgia’s Deer Lab, says it’s more difficult for bucks to see and sort out other bucks and does at night than it is in daylight. So, in the dark, bucks are drawn to scrapes to interact with other deer through their powerful sense of smell.

Miller, who is retired now and hunting deer rather than studying them, goes on to say that countless trail camera photos and videos in his studies showed bucks sniffing each other’s tarsal glands much more at night than during the day, a strong indicator that whitetails rely most heavily on their noses to keep tabs on one another.