Let’s take a look at some long-standing beliefs about scrapes and debunk them, completely or in part. 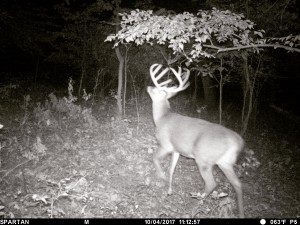 Myth: The first scrapes of the fall are the best ones to hunt.

Reality: When new scrapes start to pop up here and there in the woods in October or November, many hunters assume the rut is getting ready to rock. They find a nearby tree for a stand and climb up, pumped and ready to shoot a big deer.

Biologists call it the “scrape initiation” period, which occurs in mid-October in most parts of whitetail range, but as late as November in areas of the South that have a December or January rut. Feeling the first surges of testosterone, bucks start to paw random scrapes, perhaps as a way to vent some pent-up sexual frustration.

“But the scrape initiation is not the time to hunt scrapes because those are the scrapes deer make, and then they walk away and never come back,” says Moreland. He says the scrapes to watch will show up a couple of weeks to even a month later. For most of us, Halloween and the first weeks of November, the pre-breeding period when bucks are most active around scrapes, are the time to hunt them.

Myth: A huge scrape was made by a huge buck.

Reality: Maybe, but not always. Possible that a 150-class 10-point worked that big scrape you just found.  Or, more probably, a gang of rut-crazed bucks of various age and size came in and pawed and pawed, until a so-so scrape blew up into one maybe four feet long and two feet wide. Recent studies show that as many as 10 to 15 different bucks might paw at one scrape.

Missouri scientist Dr. Grant Woods recalls a research project when his team used video cameras to monitor scrapes. “In one case we had a 2-foot-diameter scrape that recorded more buck scraping activity than a huge 8-foot scrape,” he said. “The 8-foot scrape just happened to be where one buck got really excited and tore the place up.” 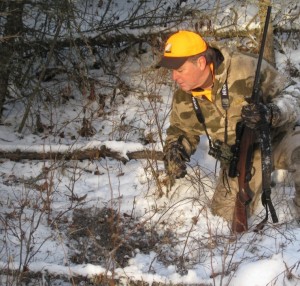 Myth: Mature bucks do 90 percent of the scraping.

Reality: Older bucks obviously scrape, and some of them scrape a lot. A deer that lives four or five years becomes experienced in the rut ritual. Mature bucks may assert their dominance by making a scrape in the presence of a subordinate buck.

But the old adage that older bucks prevent young bucks from scraping is not true. Many recent studies, with reams of camera images and video clips to prove it, show that 2.5-year-old bucks and yearlings routinely engage in visiting, smelling and pawing scraps, even the same scrapes used by mature bucks. Does also use scrapes on a regular basis.

All this activity is good. The more different deer that come to a scrape for whatever reason, the better. An old buck lurking back in the cover might see all those deer moving around, whiff all that scent and come in for a look. If you’re hidden in a stand nearby, you might get a shot.

Myth: Great strategy is to hunt a buck on his scrape line between a feeding and bedding area.

Reality: I cannot honestly say I have ever shot a buck on a scrape line. I might have, I just don’t know. I’m not even sure scrape lines per se exist. The more I hunt whitetails in different terrains across the country, the more I believe that scraping is more random and scattered than on some particular line of travel.

I really don’t scout for scrape lines anymore. From Halloween through November 13 or so, I look for a ridge or creek spot that is pocked with 5 or more fresh scrapes, along with rubs.  I sit there a few days. If I don’t spot much, I look for new set of scrapes to hunt that might be only 100 or 200 yards away.

In a landmark study on scrapes with wild, hunted bucks, University of Georgia researchers found that while some scrapes may go cold overnight, multiple bucks might eagerly paw a similar set of scrapes only a few hundred yards away. So stay mobile, always on the lookout the next set of fresh scrapes. I believe your odds are better this way, rather than trying to hunt a buck on a line of scrapes that may or may not exist.

Myth: Giant bucks are completely nocturnal around scrapes, so you’ll never shoot one there.

Reality: A lot of truth in that one, especially the nocturnal part. In the Georgia study, 85 percent of the bucks photographed at scrapes came in at night. Furthermore, most of them were 2.5-year-olds or yearlings. The researchers concluded that the mature animals (3.5 years and older) were not only nocturnal, but they also checked the scrapes from downwind and out of camera range.

One morning in Indiana a couple of years ago, bowhunter Nathan Spalding looked up and spotted a tank of a buck boring in to scrape he had doused with hot doe and dominant buck urine an hour earlier.

“It happened so fast I never got a chance to get nervous,” Nathan says. The buck ripped the scrape, took two more steps and stopped. Nathan released his arrow.

Nathan shot his dream buck and shot down one of the oldest myths in the book. Scrape watching is always unpredictable, but you never know when a big deer will show up at the most alluring rut sign in your woods. Give scrapes a shot.