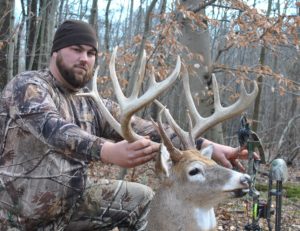 One year on November 3, a west wind howled to 40 mph, and Nick Pruitt and Ryan Russ had a decision to make: Do we stay home, or do we go?

With the rut picking up steam and the temperature 42 degrees, the friends strapped climbing stands to their backs, grabbed their bows and headed to hot spot they’d discovered on archery-only public ground.

It was a creek bottom habitat, with three wood lines that acted as separate funnels to a soybean field. The edges were blazed with fresh rubs and scrapes. The hunters chose trees about 150 yards apart, climbed up and saw deer immediately. Their stands wobbled some, but the stiff winds didn’t seem to faze the animals.

Ryan saw the huge buck first. He was moving their way, and either he or Nick would likely get a shot, depending on which funnel the buck took.

As luck would have it the giant chose the trail Nick was watching. “The woods and brush were so thick, I was unable to see him until he was within range,” he recalls.  Nick caught movement, readied his bow and touched the release.  “I lost sight of him, but I thought I heard him crash,” he said. Then Ryan buzzed his cell. “He’s right here, man!” he hollered, “25 yards from my stand!”

Nick shinnied down and ran over to his buddy and the buck. They stood shocked and dazed. The monster had 17 points and 25-inch beams. It net-scored 201 1/8”—at the time the No. 1 archery non-typical for Delaware.

What I do know is that you take off work and hunt any day or week in early November your odds of killing a big deer are as good as it gets.

I have a theory: Big bucks move best in and around the full moon closest to the rut. With remnants of the full moon glowing through the November 8 weekend this year, bucks will prowl hard for does. Sit in a well-placed tree stand for as long as you can hack it every day this week, and you have a better than 50/50 chance of seeing at least one big deer.

A killer morning stand for any day up until November 15 or so is on the edge of a CRP field, overgrown pasture, old clear-cut or the like 100 to 200 yards off an ag field where you hunted and saw some bucks in October. Many does gravitate to these weeds to bed and hang out; some girls go deep in the cover, trying to shake the randy bucks that have been hassling them for weeks. But the testosterone-addled boys are persistent and cruise in the chest-high cover after the gals.

Find a tree that allows you to see the cover well. Set up near a funnel or trail with fresh sign. It is a perfect spot to rattle until 11:00 a.m. or so. Sit all day because you might see a rack moving and sparkling in the sunshine anytime. 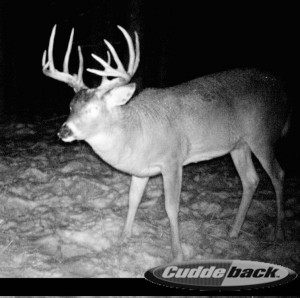 Mid-November, whether you hunt with bow or gun, is the time to get smack in the middle of the action. The rut is wide open, and it’s hard to predict exactly where and when you’ll see a good buck.

Your best shot is to set up where you can see far and wide. Try to hang a tree stand where 2 or 3 ridges and thick-cover draws converge and peter out in a creek bottom. All the terrains create a huge dumping ground for deer. You might spot a doe coming down a ridge with a giant 8-pointer lapping her heels. Or a shooter, nose down and grunting like a hog, might shortcut from one draw to the next. Or if it’s the “lockdown” phase, you might see a good buck push a doe back into one of those thickets. When deer are rutting strong, you never know what you’ll, but in a diverse spot like this, it might be something big and good.

In mid- to late November, the time of year with the most hunting pressure, you need at least one post that allows you to play off that heat. One year a friend leased 500 acres that bordered public-hunting land. He didn’t hunt the lease at all in October, but on November 18 he was there early. Dave sat at the top of a hollow he had scouted, on a vantage where he could cover three brushy draws and finger ridges below, very similar to the setup we talked about above.

Opening morning, the sun rose and rifles cracked on the public ground. Dave spotted three bucks in the next two hours. One was with a doe on natural movement, but the other two fled the nearby shooting and sneaked up the brushy funnels toward my buddy. He shot the biggest one, a 157-incher. Look for a similar opportunity 200 to 400 yards off the border of a public tract or heavily hunted private ground, and smoke your Thanksgiving buck right there.