How To Judge Bucks After The Rut 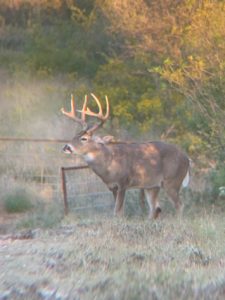 Lindsay Thomas of the National Deer Association is an expert at sizing up bucks on the hoof. I asked him to give us some tips for the December post-rut.

“Judging the age of a buck after the rut can be difficult for the same reason it’s tough prior to the rut,” he says, “because not all of the important aging characteristics are in place.

“We don’t recommend estimating the age of bucks in summer because all of them have skinny necks. Until testosterone rises as the rut approaches, you don’t get the neck swelling that helps distinguish older bucks from younger bucks.

“Over the course of the rut, we know bucks can lose a lot of weight from the exertion of pursuing does and taking less time to eat. Dr. Aaron Foley of Texas A&M-Kingsville found that 5 1/2-year-old bucks lost 24% of their body mass from the pre-rut to the post-rut.

“Stomach girth is one of the characteristics that distinguishes 5 1/2-year-olds, and a post-rut buck that has lost a lot of that girth can fool you into thinking he’s younger than he really is. But you can still find clues in the buck’s frame. It’s not impossible to estimate post-rut age with a good view or good photos, there’s just more chance for error.”

Lindsay points out that a fully mature buck will have a deep chest (from the top of the shoulder to the brisket), and he may have a sagging spine between his shoulders and hips.

“Additionally, the upper-body development of a mature buck will give him a short-legged appearance overall, while bucks age 1 and 2 will appear long-legged,” he notes. “Bucks ages 3 and 4 will seem like their legs are about right for their body size.”

“Battle scars and wounds can help indicate a buck that was fully engaged in the rut this year or in previous years, showing he’s probably at least 3 1/2 and an active participant in the rut.”

Another cool thing, tarsal staining can be a good post-rut characteristic because the stains have not faded yet.

“Bucks do more rub-urination when they visit scrapes as they get older, so a buck with a very large, dark tarsal stain was a very active scraper and is probably at least 4 ½,” Lindsay says. “If the stain extends down the back of the hind leg, below the tarsal gland, you can assume the buck is fully mature, at least 5 1/2 or older.”

“When I saw him I noticed two things immediately from 100 yards away: Nice antlers, and an enormous, black tarsal stain that extended down the back of his leg.”