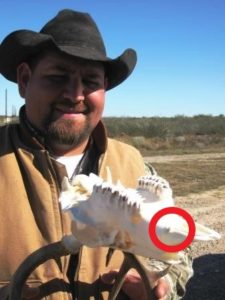 I just saw on Twitter where an Indiana hunter shot a buck with fangs.

I have been hunting whitetails for more than 40 years, and blogging about deer for 2 decades. The Indiana deer is only the third “Vampire Buck” I’ve heard about (the others were in Texas and Oklahoma).

Here’s the scoop on deer w/fangs.

Some 7 million years ago, dating back to the Miocene Epoch, ancestors of the modern whitetail had long, curved, sharp canines. Paleontologists say the small deer-like animals used the fangs, or tusks, for survival. Over time, whitetails evolved antlers for defense, and the upper canine teeth regressed.

While lower canines are present in all whitetails today, upper ones are uncommon.

Brian Murphy, a well-known deer biologist, says that upper canines are a rare but documented phenomenon.

“Researchers believe it is an evolutionary throwback to the ancestral form of the whitetail which occasionally surfaces today,” says Murphy. “While the exact prevalence of upper canines in whitetails is not known, it is believed to be well below 1 percent.”

Fangs are not only rare, but almost always overlooked by hunters.

Should a buck have fangs today, they would be only ½ to ¾ of an inch long max, and most of them would not even break the deer’s gum line. Most fangs are spotted by taxidermists that cape bucks.

One more thing, and it’s fascinating. 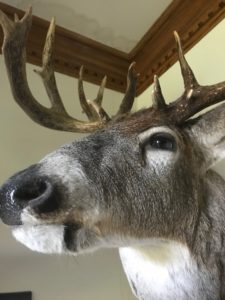 Look up at a shoulder-mounted whitetail on your wall and focus on the small, black patches on either side of the lower jaw. These patches are positioned precisely where the fangs of an ancestral deer would have stuck out from the upper jaw.

Valerius Geist, renowned mammologist and author of Deer of the World: Their Evolution, Behavior and Ecology, theorizes that the black patches were there to accentuate the white of the long canines in prehistoric deer. The fangs evolved away, but the patches remain.