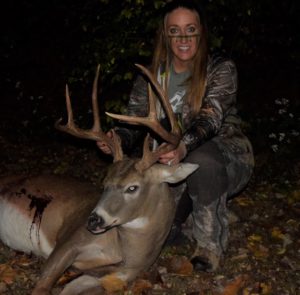 I wanted to submit our hunting photos and stories from the 2020 season. First, I’ll start with Ellie’s.

Last year Ellie and I bought a house in late September. So pretty much the entire October 2019 season consisted of packing and moving stuff. Almost every evening as we unloaded boxes and put our house together our cellular trail camera kept going off over and over with the same buck walking the same path.

Ellie looked at me and said, “Next year we gotta focus on early season and go down and hunt that stand.”

Well sure enough, the buck showed back up this year walking the same path. Ellie and I plugged in some vacation time and away we went.

I secured the straps and Ellie climbed up in her stand for her first hunt of the year. The heat was close to 80 degrees, but we still had high hopes.

I was hunting about a mile down the road and constantly checking my cellular app to see if she was seeing anything. A doe popped out, and I shot it. I texted Ellie and she was thrilled.

As I sat there in my stand waiting till dark, I randomly thought, “Surely that buck’s gotta be out there on the path.” I pulled up my app and THERE HE WAS standing right in front of the camera, 15 yards from Ellie!

Three seconds later my phone started ringing, I answered and said, “Did you get him?” I’ll never forget what Ellie said, “F—– smoked him babe!”

What a great day, I was so proud of Ellie!

Just so everyone knows the deer’s name was “Blind Joe.” He was blind in the left eye and Ellie waited till he was turned. Blind Joe never saw her pull the bow back, lol!—Thanks, Zach