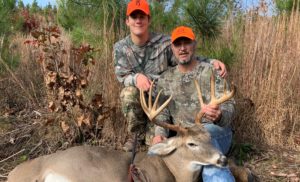 The buck made his home in a pine and sage grass cutover that joined a small strip of hardwoods in Marion County Alabama. I hunted him hard during bow season, and passed on smaller bucks waiting for him. The rut here doesn’t start till early January and I knew I had to get him before it kicked off.

The day after Thanksgiving I climbed at the edge of the cut about a quarter-mile west of where I got the photos of the deer. Hadn’t been seeing any deer movement for a couple weeks close to my camera, so I thought I would try to cover some ground.

Around 7:30 I saw a buck about 400 yards away. After watching him awhile, I spotted another buck with him. It was the big deer I have been hunting.

I took the shot at 300 yards with my Winchester Model 70 chambered in 7×57. At the shot he took off and I saw him fall over. It turned out there were two other 8 points with him. He scored right at 150 inches. Best part, my youngest son Wyatt was with me on the hunt.—Tracy Kelso

Great-looking Alabama buck, thanks for sharing! Some big deer are secretive like that. Five or 6 photos over several years isn’t many, so nice job sticking with it until you finally got him.—M.H.