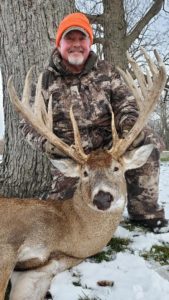 Today’s great guest blog from Randy Hunter–his hunt for the biggest buck he’s ever seen in 40 years of deer hunting.

December 16, 2020. I woke up to 2 to 3 inches of snow that had fallen during the night. I’d been waiting for the right wind to hunt a special fence row. This northeast wind was just what I needed.  I don’t hunt the fence row in the morning because it’s too hard to slip in without busting deer.  I decided to hunt there that afternoon.

This fence row is adjacent to an eight-acre woodlot separated by a small cornfield.  I had hunted this spot a couple of times earlier in the season and had seen does and young bucks, but nothing I wanted to shoot.  My whole season had been that way. Indiana has a one-buck rule, so I normally hold out for a nice buck.

To be honest, for the last two years I have really been wanting to get a crack at a giant non-typical deer that lives in the area.  He was on my trail cam once in December two years ago at night.  I had never seen him in person despite logging many hours on stand.  Some other hunters in the area also have trail cam pics of him and have named him “Ivory” because of his white antlers.  His core area seemed to be just east of me on ground that I don’t have permission to hunt.  I had always hoped to catch him out chasing a doe, and the fence row is as close as I can get.

On this afternoon I decided I was going to hunt from the ground.  Where our tree stand is located in the fence row, I can’t see the north side of the woods where I thought a good buck may come from.

About 3:15 I drove the Ranger to the field.  As I was getting my muzzleloader out of the case, I heard a loud noise and looked up to see a farmer spreading fertilizer in the field next to the fence row. Perfect timing! I watched as he headed down the field and tried to decide what to do.

I called my son, Cody, and told him how lucky I was, and he agreed!  We discussed my options and in the end I decided to go to the tree stand and hunt there until the farmer finished his work in the field. After that I would get down and hunt on the ground farther up the fence row.

After getting in the stand, I noticed that with the snow on the ground, I could see well through the trees along the north side of the woods. It was getting too late to move by the time the farmer finished the field work so I decided to stay in the stand. 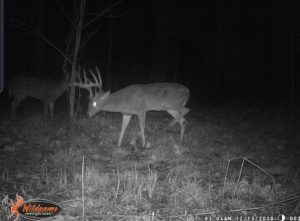 I had been sitting for 45 minutes or so when I saw a doe come out of the woods to the southeast of me and cross into my fence row.  As I watched the woods where she came from, I noticed movement and a large deer stepped out.  It was snowing again which made it tough to see but I could tell it was a shooter!

Reluctantly he crossed the field.  It was obvious he was following the doe and he was huge! I couldn’t see the doe now but I figured she would go south away from me.

As I watched I noticed the buck turned and started working his way toward me.  The doe was coming my way and pulling him with her!  I still could not see her, but I could lean out and see the buck slowly working my way.  That’s when it hit me, “It’s Ivory!” He was the biggest deer I have ever seen in 40 years of hunting and he was coming my way!

As I sat and waited, I noticed the wind had changed and the snow was blowing directly down the fence row toward the doe. It had switched and was blowing from the north.  All I could think was, “She’s going to bust me and he’ll be gone.”  I leaned out to see better and saw him standing there looking my way. He stomped his foot and I thought, “This is over.”

I leaned back and expected to see the deer bolt for the woods, but he didn’t.  Apparently, the doe hadn’t winded me and he stayed with her.  I thought, “I’d better get ready in case he steps out so I can take a shot if I get the chance.”

Good thing I was ready because Ivory stepped out, looked my way, stomped and blew twice. He was leaving and I shot. As the smoke cleared, I could see him running tail down toward the woods.  I wasn’t sure I’d hit him.  I had had to shoot quick through an opening in the tree limbs.  I hung my gun up and sat there a few minutes, trying to process what had just happened.

I called my son and said, “I just shot at Ivory! Cody didn’t believe me.

After some convincing and realizing I wouldn’t be calling at prime time if I hadn’t shot, Cody said, “Did you hit him!?”

I got down and drove back to my house with that feeling you get in your stomach not knowing how this is going to work out and fearing the worst.

We waited an hour and a half and went back to try to find the big buck.  We figured with the snow that it would be easy to follow the blood trail even in the dark.  We got there and went to where I thought he was standing when I shot.  No blood but tracks were everywhere.  I wasn’t going to be able to follow his tracks with no blood. I had an idea where he went into the woods but everything is different in the dark.

We walked along the edge looking for tracks going into the woods.  Not finding what I wanted I decided to go back out in the field and try to find blood.

As I’m looking, I’m thinking, “I just missed the biggest buck I’ll ever get a chance at.” I’m really feeling sick when my son hollered at me.

From the lowest low to the highest high, it’s hard to describe the feeling.

I made my way over to Cody. “There he is, Dad.  I caught his eye shine with my light.  I wasn’t sure at first, but then I was able to make him out.”

I asked Cody if he’d been up to him yet and he said, “No, this is as close as I’ve been. He’s your deer. You get to walk up to him first.” 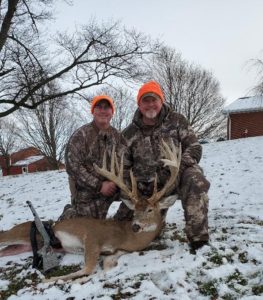 As I got closer, I could see what a magnificent animal he was!  We just stood silently and looked at him.  We couldn’t believe how big he was. The deer of a lifetime and I got to enjoy it all with my son!  We’re still celebrating!

It’s funny how things work out.  If it hadn’t been for the farmer spreading fertilizer on the next property, I’d have been hunting on the ground north of the stand and would never have seen Ivory.  Maybe it was fate, maybe I was supposed to get him.—Randy Hunter