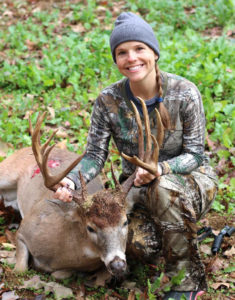 From Realtree 2020 Rack Reports: Florida native Kim Ellis and her husband, Scott, took a road trip to Kentucky to hunt with some friends last fall. November 11 turned out to be a banner day.

“It was a quiet, crisp morning,” Kim said. At sunrise two does walked within 30 yards. A 6-pointer followed a half-hour later. After that, activity slowed.

Kim blind-called every 15 minutes. Eventually, a doe walked up the hill toward her position. A giant she recognized from trail-cam photos chased hot on her heels.

“Thankfully, I was able to get him stopped, and that’s when I released the arrow,” Kim said. The buck wheeled and ran. She called Scott and they waited 45 minutes before blood trailing.

It started out slow, and then trickled to nothing. After some time combing the area, they recovered the deer.

15 scorable points and a gross-score of 183 inches!

Postscript: I have written and said on TV hundreds of times that you have nothing to lose and quite possibly a lot to gain by blind-calling with grunts every 15 to 30 minutes while you are on stand. This can be especially effective in the rut during times when no deer are in sight. You never know when or where, but a boss buck is apt to hear your grunts, thinks it’s either a hot doe or a rival buck, and come running in to check you out. Way to go Kim, great hunting and beauty buck called in and shot at 17 yards.