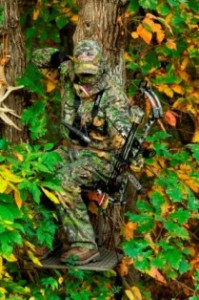 Fact: It is warmer where most of us hunt than it was a decade ago. And while it was always warm in many places in September and October, it can now be downright hot during those first weeks of bow season.

It’s not unusual for warm weather to extend into November or even December. During a muzzleloader hunt here in Virginia last year, it was the warmest November in 25 years!

By all accounts this pattern will continue, and so it is more important than ever to factor warm weather into your game plan.

Dave Moreland is an avid hunter and a biologist who worked for the Louisiana Department of Wildlife and Fisheries, serving many years as the state’s Deer Program leader. When you manage and hunt deer down in sweltering Louisiana, you learn a thing or two about dealing with hot weather.

Moreland’s extensive research boils down to one thing: Nothing is more important than temperature for determining whether or not deer, and mature bucks in particular, will be active. Simply put, he says that on warm to hot days, most deer won’t move much if at all. It’s uncomfortable for the animals, and they don’t need to feed because they’re not burning much energy.

Used to be in years past, if Dave had a couple of hours to hunt one afternoon, regardless of how hot it was, he’d run out and climb into his best stand. Not these days.

Say it’s sunny and a humid 75 degrees one afternoon, which is common in bow season not only in the Deep South but in many parts of the country. You want get out there and hunt when you can, but Moreland feels you are doing worse than wasting your time, you’re filling the woods with scent and helping a big buck pattern you. He believes you can make a big deer more skittish and harder to kill the rest of the season by hunting on hot days when you have little hope of shooting him anyway.

Moreland is retired now, and he loves that because he can be flexible and tailor his hunting to days when the conditions are perfect. Namely when a cold front blows in from the west or north and drops the temperature 10, 20 maybe even 30 degrees. He confirms something I have been writing about for many years—an early cold front brings with it your best chance to punch a tag in late September or October anywhere in America. As the air cools and dries for a few days, bucks feel good and frisky, and they get up and move a good bit.

In one study in Louisiana, Moreland tracked a collared buck that went from nice 10-pointer in 2010 to a massive 170-inch, 13-pointer in 2011 and back to 160-inch, 11-pointer as the deer began to go downhill in 2012. He found that nearly all of the old buck’s movements were associated with cold fronts.

While Dave likes to hunt the day before a front blows in, he, like me, loves the two or three days on the backside of a weather system. When a front has passed and the rain has quit and it starts to clear w/high pressure, we never miss a day in the woods because that’s the break you need to see a lot more deer on their feet.

I add that you often have to deal with wind for a day or so as a front trails through, but that is okay because you’ll see deer on their hooves, especially around a food source in the afternoons.