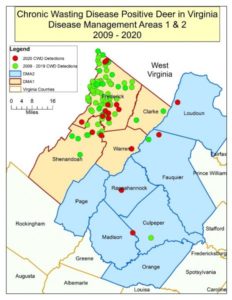 Within the two DMAs, a total of 20 hunter-harvested whitetails were confirmed to be infected with CWD. Of the 20 CWD-positive deer, 13 originated in Frederick County, two originated in Shenandoah County, and one was harvested in each of Madison, Loudoun, Fauquier, Rappahannock, and Warren Counties.

These CWD detections were a result of intensive sampling efforts that resulted in over 3,000 deer being tested for CWD from these two DMAs combined.

DWR expects to receive and make available the results from CWD surveillance efforts in the remainder of counties not included in either DMA later this spring.

While I initially viewed this report as good news—CWD was first confirmed in Virginia in 2009, and with only 20 new cases in the last year, there seems to be no major spread of the disease–officials at the DWR were quick to point out that it is difficult to use the terms “good news” and “CWD” in the same sentence.

Based on the last 11 years of CWD testing data collected from Frederick County, it is reasonable to conclude that CWD is firmly established in this county.

As such, we have begun to focus our resources on monitoring geographic spread of the disease in surrounding counties rather than continuing to monitor prevalence in a county where the disease is considered to be endemic.  This is a consequence of a finite number of resources (staff and money) in the face of an expanding disease landscape.

We are diagnosing fewer CWD-positive deer in Frederick County each year because we aren’t sampling as heavily in that county as we use to.

Unfortunately, each season we are confirming the disease in deer that are killed more than 20 – 40 miles from Frederick County. This past year alone we diagnosed CWD in 4 new counties: Loudoun, Warren, Madison, and Rappahannock.

Currently, we have 11 counties included in the DMAs of northwestern Virginia and 9 of them are confirmed to be CWD-positive.  As we continue to monitor CWD in these counties, we will hopefully be able to better estimate apparent prevalence in the areas of these outlier CWD detections, but we don’t have enough data yet to draw any conclusions.

Based on the testing data we currently have it certainly appears that the prevalence of the disease around the non-Shenandoah and non-Frederick county detections is low. However, the main concern is that, over time, prevalence will being to creep upwards, as we have seen in Frederick and Shenandoah.

But, at the moment, prevalence appears to be low around these detections outside of Frederick and Shenandoah counties.

To me, that is good news, but wildlife managers and hunters not only in Virginia but across the U.S. need to stay vigilant and engaged on the CWD threat. 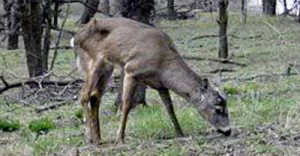 About Chronic Wasting Disease: CWD has been detected in 26 states and 3 Canadian provinces. In Virginia, a total of 108 deer have tested positive for CWD since 2009.

This incurable disease, found in deer, elk, and moose, is a slow-acting and progressive neurologic disease that ultimately results in death of the animal. The disease-causing agent is spread through the urine, feces, and saliva of infected animals. Clinical signs of CWD, which typically do not develop for several months to over a year after exposure, include staggering, abnormal posture, lowered head, drooling, confusion, and marked weight loss.

There is no evidence that CWD can be transmitted naturally to humans, pets, or livestock (with the possible exception of pigs). However, the Center for Disease Control and Prevention recommends hunters test all deer harvested from known CWD-positive areas, wait until test results are received prior to consuming the meat, and do not consume any meat from animals that test positive for the disease. For more info: dwr.virginia.gov/wildlife/diseases/cwd.