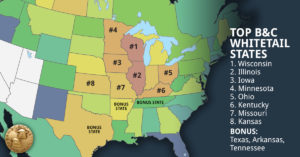 From the Boone & Crockett Club’s most recent data:

Wisconsin is the #1 ranked state with 1,822 total entries and 6 counties in the top 20 U.S. counties with the most records produced. The #1 county overall is Buffalo County with 150 entries in the record book.

Ohio moved up in rank to #5 with 1,049 total entries. Of particular note, all of the new typical records in the state’s top 10 and 6 of the 10 non-typical state records were taken in the 2000s – this shows that current state management is producing consistently large bucks.

This info and more is found in the recently released 6th edition of B&C’s Records of North American Whitetail Deer, an invaluable source for hunters who want to research whitetails, plan hunts anywhere in the country and read stories of the biggest bucks ever shot.  The 700-page book is available for $60 on the Boone and Crockett website; to order click here. 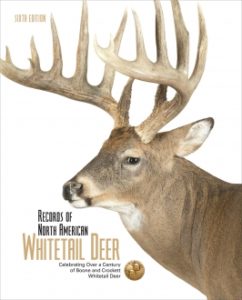