Why Do Some Bucks Shed Antlers Late In Spring? 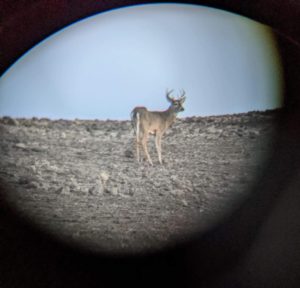 Hey Mike: It was an easy winter on whitetails this year in NE North Dakota. We had very little snow and only about 1 week with really cold temperatures. The deer should be in good health.

I got this picture of a buck still holding his antlers on April 10th! Does that seem abnormally late? What is the latest you have heard of whitetails dropping their sheds this far north? I figured it was possible considering the mild winter. Other ideas that crossed my mind were, is this an antlered doe? But usually, antlered does remain in velvet. Or maybe this was a buck who got injured or otherwise had low testosterone?–Derek Plautz

Derek, thanks for checking in. I believe this is just one of those random late shedders that are found in most herds across the country. Grant Woods, one of America’s top deer biologists and host of Growing Deer, concurs and says:

“It’s common for a few bucks to hold their antlers into spring and turkey season. These bucks are on the very right end of the antler shedding bell-shaped curve. There’s a chance the buck was injured and his testosterone cycle is messed up. However, it’s more likely that he’s just programmed to shed later than others bucks.”