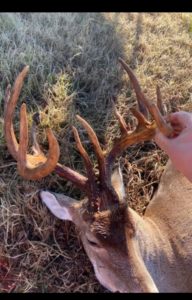 Our friend Wren sent these pictures of a great and unique buck shot in Texas last season. “The common base is just huge!” Wren said.

What caused that one massive base? Had he lived, could the buck possibly shed this mass? I asked Kip Adams, wildlife biologist and Chief Conservation Officer for the National Deer Association. Kip says:

Science has shown that you can move growing antler tissue to other parts of the body and grow an antler in a different place (other than a deer’s head). Research has done this on a deer’s leg and even a mouse’s forehead.

I know of a shed that was actually 2 antlers fused together like the one in the pictures. In that case, the buck shed it/them.