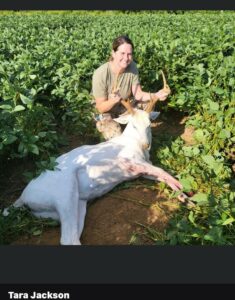 Earlier this month, a friend from southwest Georgia texted me these pictures with the words: Hey brother, a friend of mine killed a solid white buck! Deer of a lifetime!

Back in June, Tara Jackson…saw something that she had never seen before. As a buck ran across a field, she said to her boyfriend Bryan Spivey, “Oh my goodness, that’s a totally white deer!”

On Wednesday Sept. 8, Tara got some fresh trail-cam photos showing the buck was still there and it was beginning to shed its velvet…. 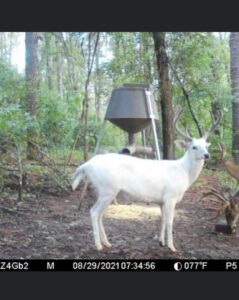 On Sept. 12…the white buck appeared, and she steadied her aim and took the shot. However, as soon as the bolt was released, she saw it fly over the top of the buck’s back.

The buck ran off, but a short time later, it circled back around and walked right underneath her stand…. This time she took her time and hit the buck…

When the blood trail got cold, Tara called in a friend with a tracking dog named Lilly, which found the usual buck, truly the deer of a lifetime. Awesome Tara!

NOTE: While many people naturally assumed Tara’s buck was an albino, it was not. An albino animal has a pink nose and eyes. This buck is one of the whitest piebald deer I have ever seen, with just a spot of brown on its tail. It’s nose, eyes and hooves are black like with any other deer.