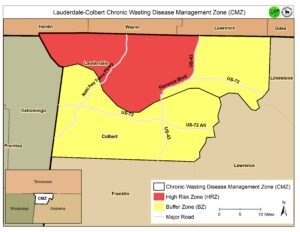 A sample recently collected from a hunter harvested deer in west-central Lauderdale County has been confirmed positive for Chronic Wasting Disease (CWD). This is the first case of CWD detected in Alabama’s deer herd.

CWD was first detected in west Tennessee and Mississippi in 2018 and has been moving slowly toward Alabama. The Alabama Department of Conservation and Natural Resources (ADCNR) implemented multiple proactive regulations to combat the spread into Alabama. Compliance from the public, notably hunters, helped delay the spread into the state for several years.

The sample from the CWD-positive deer was submitted as part of the state’s ongoing CWD surveillance and volunteer testing program.

Within the CMZ, there will be no seasonal or daily bag limit restrictions and no antler restrictions for deer harvested on privately-owned or open-permit public lands in Lauderdale or Colbert counties through the remainder of the 2021-2022 deer season. This also includes the following Wildlife Management Areas (WMA) and Community Hunting Area (CHA), Lauderdale WMA, Freedom Hills WMA, Riverton CHA, and Seven-Mile Island WMA. On those WMAs, hunters will be allowed to harvest any deer daily through February 10, 2022. These changes do not apply to any other county, WMA or CHA in the state.

“Now that we have detected CWD in Alabama, our primary objective is to determine the prevalence of the disease in the area affected,” said Chuck Sykes, Director of ADCNR’s Wildlife and Freshwater Fisheries Division. “The new regulation is intended to increase the opportunities for hunters to supply samples for CWD testing. We need hunters to continue to hunt and submit deer heads for testing. These additional samples will help us better determine the extent of the disease in this area.”

Additional details pertaining to Game Check, the new regulation and guidance on best management practices for transportation, disposal and testing of harvest for each zone can be found at www.outdooralabama.com/cwd-info

About CWD: CWD is a member of the group of diseases called transmissible spongiform encephalopathies (TSEs). CWD is a progressive, fatal disease that commonly results in altered behavior due to microscopic changes made to the brain of affected animals. An deer may carry the disease for years without outward indication. In latter stages of the disease, signs may include listlessness, lowering of the head, weight loss, repetitive walking in set patterns and a lack of responsiveness.