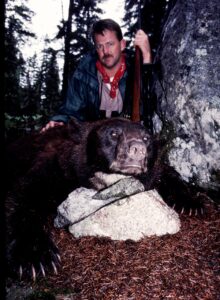 Years ago out in Idaho, I shot this heavy old chocolate bear that piled into an alder tangle, rolled around, popped his teeth, and roared for three minutes that seemed like three hours. I looked back and saw my buddy and guide running for the hills! Another time on a stalk in Canada, I aimed and hit a giant boar that waddled across a hillside above me. Before I could scram he was coming straight at me, rolling and flipping down the slope like a VW bug going off a cliff.

I recovered both those animals, and turned out the shots had been fine, smack in the boiler room where I aimed. I think about those knee-buckling events every spring around bear hunting time. They remind me to remind you not to take black bears lightly. If you are going bear hunting this spring, load up with power, and be smart when choosing the shot at a big, tough predator.

With a thick hide and a heavy bone structure about the shoulders, an old black bear is a tough quarry. At a minimum, use the venerable .30-06 with a premium 180-grain bullet like the Hornady  Interlock or Outfitter CX; or 7mm Rem. Mag with 162-grain SST.

Grant Kuypers, who guides hunters in the bear-thick bush of west-central Saskatchewan, likes to step it up a notch. “The .300 Win. Mag. with a 200-grain bullet is my rig,” he says. “I have lent it out to many an American hunter, and it flat-out kills bears.”

On the upper end the .338 Win. Mag. is not too much gun for bears but ONLY IF you can handle the recoil and shoot it straight. A premium bullet weighing between 180 and 225 grains would be a solid choice.

“Sometimes an old bear will hang 50 yards or farther off a bait site and slink around back in the thick brush until dark,” notes Kuypers. “For a shot like that, the bigger the caliber and heavier the bullet the better.”

Where To Shoot a Bear

Broadside or quartering-away are the best and only shots for bowhunters and riflemen alike. With a rifle, aim your scope halfway up a bear’s side and behind or on the shoulder. “If you’re shooting a big caliber and heavy bullet go right through the shoulders,” says Kuypers. “That’s the best way to put a bear down with minimal tracking.”