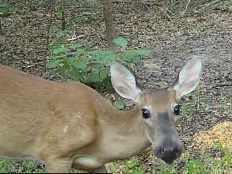 Here on the blog, I am documenting as many big-nose deer as I can. Thanks to Susan for information on this latest Bullwinkle from summer 2022:

Mike: I knew what a Bullwinkle was because I have a friend that has a big-nose buck over in Dallas County, AL. Once mine showed up I started reading articles and ran across yours. One of the big-nose bucks harvested in one of your articles was in Furman, AL. That is where mine is at too.

I know from reading that the buck’s swollen stout is a bacterial infection and doesn’t appear to spread. We all want our deer to be as healthy as possible, so whatever I can do to help with any documentation please let me know.

The Bullwinkle comes in with about 4 does consistently. He is a button and appears to be healthy and eating well. I started running cameras in July and have had him ever since. He was not there or not showing the Bullwinkle last year if he was around.–Susan

About Bullwinkle Disease in whitetail deer: Experts I’ve interviewed believe the swollen muzzles of these deer result from chronic inflammation of tissues in the nose, mouth and upper lip. All of the cases studied by researchers in labs so far have shown similar colonies of bacteria in the inflamed tissues. 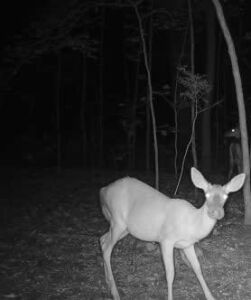 According to the Southeastern Cooperative Wildlife Disease Study (SCWDS) at the University of Georgia, which has done by far the most research on this malady, Bullwinkle disease has only been known to exist since 2005; no cases appear in 50 years of SCWDS files prior. Scientists are unsure of this is because the disease has only been around for 17 years, or because hunters from across the country can now share photos of their big-nose deer kills on social media and websites like BIG DEER, bringing more and instant recognition of the disease.

While Bullwinkle doesn’t appear to be fatal to deer, Keel notes that many animals with the chronic bacterial infection suffer weight loss that weakens the animals. Keel adds that since most cases of the disease are random, “It doesn’t seem to have any impact on overall populations.”

While I have reported on cases of big-nose from Texas to Minnesota, ground zero for Bullwinkle Disease seems to be  Alabama, and scientists don’t know why.