How To Kill A Good Buck In Early Bow Season 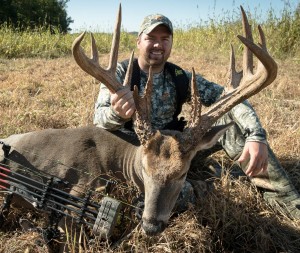 Your strategy starts with a working knowledge of a whitetail buck’s home range and core area. New science reaffirms that the living quarters of most mature bucks are relatively small, especially on lands with good food sources and bedding cover.

Researchers from North Carolina State University fitted adult bucks with GPS tracking collars and found that bucks’ home ranges averaged 400 acres in late summer through early October.  Most recently, Clint McCoy, a graduate student from Auburn, tracked 37 collared bucks on a 6,000-acre property in South Carolina. He found that the home ranges of various age classes of bucks, from 2.5 year-olds to 4.5 year-olds, averaged only 300 to 400 acres. One mature buck he tracked lived entirely within 108 acres.

If you go out in the coming days and glass a fine 10-pointer in a field, or get a cam image of a heavy 8 with just stripped velvet, you can surmise he is living and bedding close by.  He will most likely be around and huntable in your early bow season in September or October.

In late summer whitetails are genetically programmed to set up their core areas near nutritious food sources and with heavy bedding cover close by. This way bucks can pile on the pounds (up to 20 percent of their body weight now through September) while only moving short distances.

Finding shooter bucks now is all about zeroing in on the best food sources. The top four: alfalfa, soybeans, clover and corn. If you have any of these fields on your hunting land, or if the crops are planted on neighboring properties, you will have bucks in your woods to hunt.

In September, It’s fairly easy to glass, locate and pattern bucks that come to feed in the alfalfa and beans fields. But setting up to put an arrow into one of those bucks is not so easy. Even though they have not been hunted for nearly a year, big, mature bucks are unpredictable, and many are largely nocturnal even in the early season.

Take, for example, one of the 4 .5-year-old bucks that researcher Clint McCoy tracked in South Carolina. The old boy set up in a core area where he only had to move ¾ of a mile to eat in a soybean field. Clint’s data showed that he never got to the field before 9 p.m., and he was always back in bed before sunrise in the mornings.

“There was only one option for a hunter to take advantage of this buck’s predictable feeding pattern: squeeze in as close to the buck’s bedding area as possible,” said Clint. “Although he never approached the bean field before dark, (the buck) was typically up and moving 30 minutes before the end of shooting light.”

Clint surmised, and rightly so, that the only way a hunter could have a chance at a deer like this was to take a risk, play the wind, push in with a tree stand closer to the buck’s bedding area and set up along the route to the beans.

When you hunt around fields in the early season, hang most of your stands on the edges, or just back in the brush along trails. But if you’re hunting hard and not seeing a big deer before dark, don’t be afraid to get aggressive and push in closer to his bedroom. Again, it’s risky.

If you hunt where oak trees grow, one day in early September you might notice a major shift in the feeding patterns of deer. If and when acorns, which are rich in carbohydrates and fats, start falling, most deer will leave the fields and move back into the woods to gobble the nuts and pack on more fat reserves for the rut and winter. 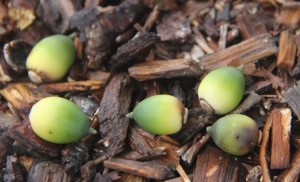 Or, you might not see a noticeable change in movement.

It all depends on whether it will be a good or poor mast year in your area. Now is the time to find out by walking your woods and doing a rudimentary “acorn survey.” A lot of green nuts will already have fallen, so look around. As you hike ridges and bottoms, glass the tops of large oak trees. If you spot clusters of new acorns near the ends of limbs (15 or more nuts per branch for a white oak, and 20 to 25 or more for a red oak) it will be a good mast year. Zero in on a few of those big productive oaks near brushy funnels, and plan to hang stands nearby for super bowhunting in a month or so.

Conversely, if your scouting reveals few green acorns in the treetops, you know mast will be poor. Better to stick to stands in and around the edges of fields in hopes of getting a crack at a big buck early.