How To Bowhunt October Deer 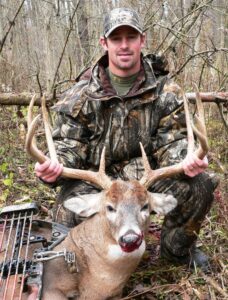 On a crisp, colorful afternoon several years ago, Ontario bowhunter Shane Good shot the buck of his dreams, a 171-inch giant (see picture).

The next season, on October 27, Shane ran his climber up the same tree and watched incredulously as another buck—bigger than last year’s—rolled onto the scene. He grunted, and the giant came on a string. Shane’s shot was true; the main-frame 10-pointer scored 176!

I emailed Shane and told him how cool it would be to shoot a third monster from the same tree 3 years in a row. This guy is a tremendous bowhunter who was on a hot streak, and I thought he could do it. He sent me this note and photo the next fall on October 28:

Mike, wanted to show you the buck I arrowed earlier today. You said it would be awesome to shoot three 170s from the same tree. Unfortunately, I have to settle for two 170s and a 162!

Incredible achievement with 2 good lessons: One, find a hot tree that produces and hunt it year after year around the same time; the 3 giants that Shane shot were not there by happenstance, they were funneling by that tree for some reason as they prepared for the rut. Two, Halloween week is, all things considered, probably the best week to bowhunt monster whitetails. Big deer are scraping and prowling, moving more and more in daylight, and they have not been pressured by gun hunters yet.

Here are some more good strategies for October:

It’s warm and dry in late summer and into October in many areas.  When it finally rains a good bit, soon thereafter green weeds and forbs pop up in a cut hayfield, edge of a harvested cornfield, logging road—you get the idea. Deer love to feed on these new green sprouts. Find a tree for a stand near a patch new green feed and hang there. You will see deer and quite possibly a shooter buck.

Scrapes in the Mast

A sure-fire spot to find the first scrapes of mid-October is on oak ridge within 100 yards or so of a corn or soybean field. As the acorns fall, many deer will stage in the oaks in the afternoon to hit the nuts before moving out to the crops after dark. If from scouting you know of a ridge with trees that will produce even a decent crop of acorns, go there now and set a stand. Beginning around October 15, you will find lots of fresh scrapes (and rubs) on a ridge, and it will be a hot travel corridor to hunt.

A study in west-central Tennessee found that bucks prefer to rub in 2 types of terrains—“valleys” and “secondary points.” You know the valleys—draws, hollows, swales, whatever you call them in your part of the world. The research found that swales and draws with brushy ground cover (big bucks love it!) had twice as many rubs than other hollows and valleys with less vegetation. The brushy draws are prime travel lanes and good places for stands all month.

The two days after the first cold front of October blows through and drops the temperature from, say, 75-80 degrees to 50 or 40 is one of the best times all fall to be in a bow stand. Bucks in winter coats that were sluggish in the early-fall heat get revved up and finally feel like moving more. The later in October a front hits, the better really; the rut is coming, the bucks feel it, and they walk harder in daylight, scraping and wandering for the first hot does. So when you see the first cold front (dry or rainy) coming, take off work and get your butt in your best stand for at least the next 2 days.