Why And How To Scout Deer In February 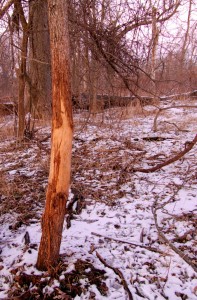 Hunting from one stand on and off for a month last fall, I saw 12 different bucks. Most were small, two were borderline shooters that I passed and one 9-pointer was 150-class. Hot after a doe one day, the giant rolled off the ridge across from me and crashed down into a slough, out of muzzleloader range and moving too fast for a shot. All I could do was sit and gawk his tall tines, brassy like butter knives in the sun.

The season came and went, and I never saw him again. I didn’t shoot any buck from the stand, and that is all right. Getting skunked sometimes is part of the game.

Just the other day I went back to those woods. I needed some exercise, and the chilly air would clear my head. I walked to the stand and took off east. I went a mile and didn’t find much. I circled back and checked the hollow below. When I had hung that stand last summer, I had expected the funnel to be red-hot, but no.

I pressed on. Ninety percent of buck hunting is knocking around the woods, finding sign (old and fresh), thinking, working the puzzle. It takes days, weeks, sometimes months or even years to get the deer patterns right.

To the west of the stand I hit pay dirt. A muddy trail crossed a creek and intersected with two more paths up on a nearby ridge. They were still active and pocked with fresh tracks, and they even smelled musky of deer. I stopped counting at 27 rubs, still shiny some 4 months after they had been blazed. Bucks had pawed scrapes all over back in November and December; the dirt ovals were still visible before the spring green up.

Things were starting to fit. I thought back to those deer I had seen months earlier. Most of them had been off to the west, either coming or going to or through this very spot. I found a hickory tree where the northwest wind should be good next fall, and I flagged it with orange tape. I’ll move my stand over here this summer, and I’ll sit in it on the black-powder opener in November. I’ll see deer and there’s a decent chance I’ll smoke one.

That is how just one day of post-season scouting in February or March can help improve your hunting for the next year. Here are some specific things to look for when you’re knocking around the woods this weekend.

Cut a deer trail and follow it as far as you can. A fresh path in the mud comes and goes to a late-season food source. But the older, fainter trails are more important. They lead to and from corn, beans, acorns and the like that deer hit back in the fall while you were hunting. If you missed those trails then, remember them and hangs stands nearby next season. As you walk a trail, note low spots, corners, creek crossings and other good funneling spots for bow stands.

From your scouting and hunting last fall, you know some areas where bucks rubbed and scraped. Forgot those and poke around for secluded, sign-blazed hogbacks and bottoms you didn’t know about. As I alluded to earlier, those months-old rubs and scrapes are easy to see and find. Bucks are habitual, and they will rut there again next fall. Now you have other options for stands.

When I’m hunting I try to avoid other people. On a post-season scout, I try to find their stand spots and nail down the paths or ATV trails they use to come and go. I assume the hunters will be back next fall, and so I will avoid those spots. But, I look for strategic ridges, bottoms or funnel points where I can hang a stand and shoot a buck that one of those guys might inadvertently push my way. Gotta play off the pressure, man.

Of course you ought to keep your eyes open for sheds, cool souvenirs and your best tangible evidence that a buck was recently in a spot. Freshly cast antlers are where you find them, but your best bet is along a muddy trail that wends between a late-winter or early-spring food source and bedding area. Find a chunk of 4- or 5-point bone (both sides if you’re really lucky) and you know that shooter you saw last season survived the hunting season. Or maybe you never saw the buck that dropped it–that is a thrill to know he was there! If the winter was mild and if he doesn’t get hit by a car over the summer, there’s a good chance he’ll be back on your land next season. With all the new stuff you’ve just learned about your spot, you just might be sitting pretty in a stand waiting on him.

Quick Tip: Use a map, compass, sketch pad and your imagination to visualize how bucks worked the old trails or scrape/rub lines you find. Keep in mind that mature bucks like to quarter into the predominant wind when they can. The more you nail down how deer use the common winds in your zone, the more bucks you’ll see and shoot.