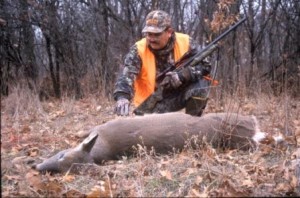 For whitetail hunters, what’s a hot scent attractant to use in early November?

Missouri biologist Dr. Grant Woods has on occasion shot a mature doe and let the dead deer lie in front of his stand.

“The smell of an adult doe, especially one in a pre-receptive or receptive stage, is a great attractant to mature bucks,” he says. “I’ve shot several bucks while they were actually sniffing the doe I had harvested earlier in the hunt.”

Grant says that even the disturbance of a single rifle shot doesn’t matter when bucks are moving and rutting.

“I realize this is contrary to popular belief, but it can work,” he says.

If you try this unorthodox tactic, I recommend you use a firearm and aim for a close-in, high-shoulder shot that hopefully drops the doe on the spot, or at least close and within sight of your stand.

Be sure you have the proper tags, and that shooting a buck and a doe on the same day is legal where you hunt.