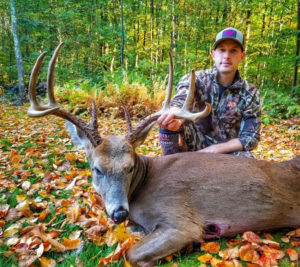 Instagram post/message from Brendan Whelan, who shot this beauty earlier this month in southern New York:

I shot at my biggest buck last year, hitting him in the shoulder and not recovering him, only to see him a week later chasing does. Having a 4-year history with that deer and only 2 encounters total made it that much harder to swallow that I messed up my one opportunity I had worked so hard for.

Well, this year he never did show back up, but this guy did! I watched him grow all summer as he transitioned over into my food plot in early September, all the while keeping tabs on his movements with trail cameras.

Opening week we had a cold front sweeping in, and I knew he would be out on those greens a little earlier in the evening. The field was full of deer early and I knew it was only a matter of time. 6:50 pm he stepped out and gave me a shot, slightly quartering to, and I wasn’t passing it up.

With no blood at the impact sight, I backed out to wait for the morning light. He didn’t make it 20 yards off the field edge! My biggest buck by far! God is so good!—B.W. 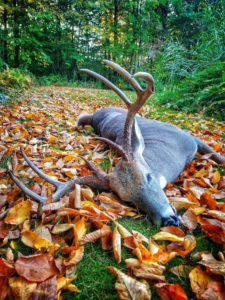 Great 8 buddy, beautiful symmetry on that rack. I see maybe 4-5 inches of deductions.

Brendan’s buck is one of many I’ve seen shot in early October 2020 from across the country. All of the stories point to an early cold front in the area that had deer more active than usual, and bucks on their feet.

Some people might tell you otherwise—that cold fronts have little or no effect on deer movement—but I disagree, and stories like Brendan’s prove it. Hunt the fronts!