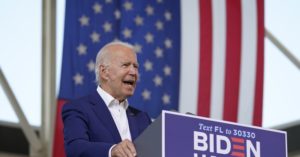 A television reporter asked Joe Biden if he wanted to take away peoples’ guns and he snapped back, “Bingo!”

He means it, and then some.

Gun owners will be left with a choice; hand over your (so-called assault weapons) to the government in exchange for some amount of cash, or fork over $200 per firearm in order to register them under the National Firearms Act…

The National Rifle Association estimates that gun owners would pay at least $3.6-billion in taxes if they wanted to legally keep their guns:

A tax of $200 on 18 million AR-15s means that gun owners could potentially be required to a pay a collective $3.6 billion in taxes, if this policy were enacted into legislation.

That figure does not even consider other guns that might be deemed “assault weapons” by Democrats, which could also fall under the same provisions of the National Firearms Act.

Bearing Arms says the $3.6-billion tab also doesn’t include the cost of registering ammunition magazines that can hold more than 10-rounds, which under Biden’s plan would be classified as “large capacity magazines” and would also have to be registered under the NFA at a cost of $200 per magazine.

Further, this straight from the Democratic candidate’s website: Biden will enact legislation to prohibit all online sales of firearms, ammunition, kits, and gun parts.

This is the slippery slope that we law-abiding gun owners have been fearing for decades. Once anti-gun politicians like Biden and Harris get their foot in the door and restrict or confiscate one type of firearm, they then feel liberated to go for more and more.

2020 has been a strange and chaotic year, but one thing is certain: Our Second Amendment rights hang in the balance on November 3.

For gun owners and gun hunters the choice is clear. Vote!