Nobody in his right mind tries to shoot a deer in the head with a bow/arrow/broadhead. But occasionally a bowhunter takes a poor-angle shot, or a buck dips and whirls while an arrow is in the air. The unfortunate result is a broadhead that smacks a deer in the skull.

One time in Maryland a hunter dropped a 8-point with a perfect lung shot. The deer wasn’t big enough for a shoulder mount, so he sawed into the skull to do a European.

Look what he found in the before and after pictures below.

Sunk just below the right eye socket and into the honey-combed nasal area was a piece of an arrow with a 3-blade broadhead. 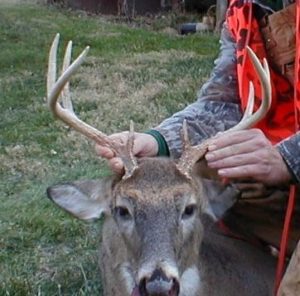 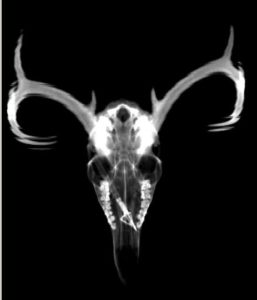 I figure the arrow must have been fired into the buck the season before because the hunter told a local newspaper, “There was no physical evidence that the deer had an arrow in it. The skin wasn’t broken, there was no pus pocket anywhere and the eye appeared to be normal.”

The buck had broken off the arrow (very common) and things had healed around the piece of arrow and broadhead. Miraculously, the deer apparently had no problem breathing, seeing or eating. Whitetails are tough animals!

The X-ray photo jogged my memory. One day I took a buddy out to my lease and put him in a tree stand. I returned at 10:00 AM and he said, “I shot one, but I think I hit him in the head.”

“WTF…” I hollered. He shrugged. We looked for 4 hours but never found a speck of blood.

A few weeks later I bumped into a guy who hunts an area about a mile from where my friend messed up. “Damnedest thing, I shot an 8-pointer with an arrow sticking out the back of his skull. The deer looked weak, but he was getting around pretty good. Know anybody who shoots a 3-blade Muzzy?”

“No,” I lied and walked away. But I am glad he killed that buck and put this sad story to an end.

IMPORTANT NOTE: Unless you are an Army-certified sharpshooter, never try to shoot a deer in head with a rifle bullet either. I know a lot of people do it, especially on does late in the season when trying to meet a management goal, and to save as much meat as possible.

But don’t you try it! For the average hunter, there’s way too much room for error. Every season I hear stories of deer wandering around and trying to survive with their jaws or nose tips shot off. Horrifying and unethical, all deer deserve our respect!

For all you new hunters out there, whether you hunt with bow or gun, shoot a deer in the shoulder and lung area only. Period.