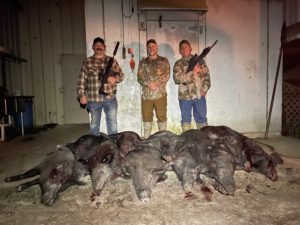 There are some 9 to 10 million wild hogs in America, tens of thousands of them rooting across all 159 counties in Georgia, including down in Ware County where the Gopher Plantation is located.

An invasive species, feral swine cause significant damage to crops and natural resources. The economic impact of hog destruction in Georgia alone is estimated at more than $150 million.

Feral swine are incredibly prolific. Sows have 1 to 2 litters of 4 to 6 piglets per year. Once little hogs reach 10 to 15 pounds, natural predation is not a factor. Hunting and trapping afford a modicum of control, but once a population of wild hogs is firmly rooted in an area, like it is at the Gopher Plantation, you cannot eradicate them all.

But last week, my friends Jason Morton, John Fink and I looked forward to thinning out a few.

We met at the rifle range to scope up and sight-in. We had plenty of firepower. Jason, VP of Marketing at CZ-USA, had bought 5 rifles, 2 bolt guns and 3 CZ Bren 2s.

Within the hour John, who works for Trijicon, had optics on all our guns. He mounted the excellent Credo HX scopes on the bolt-actions, and Trijicon Thermal scopes on 2 of the Bren 2s. He topped the other Bren 2 MS with a Trijicon MRO sight. 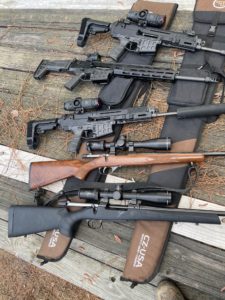 Ryan Solomon, head guide at the Gopher, had been baiting up the hogs with corn and peanut butter (leftovers from a local peanut shelling operation) for weeks before our arrival. He told us that while the hogs moved some in the mornings, they were by far most active an hour before sundown and at night.

And did the hogs ever move! After a front blew through and dropped the humidity and temperature down into the lower 70s, we cruised the sand roads of the 5,000-acre low-fence property and found hogs around every bend. 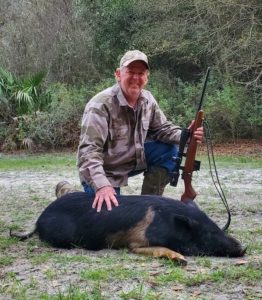 The three of us traded off the daytime rifles, one a 6.5 Grendel and the other in .30-06, and starting dropping hogs left and right.

For me, the highlight of the day hunting was a big sow kill from a makeshift blind with the Bren 2 topped with the Trijicon MRO. I put the green dot on the hog’s shoulder and dropped it on the spot, double-tapping for good measure.

Then the fun really began as we broke out the Trijicon thermals.

In the pitch black, Ryan and I crept up on a group of feeding hogs, maybe 8 swine, and I cut loose with the 5.56. I dropped one sow and pigs ran everywhere. I missed a few before dropping a second one on the field edge.

The rush of hunting with thermal technology is hard to describe! I have done it a few times, and it never gets old, only more fun and addictive.

Later that night John, a crack shot, stalked with 80 yards of a huge boar and flattened it with one shot to the neck. 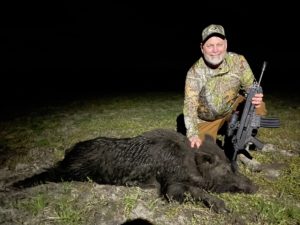 Meantime Jason, another top shooter, hunting with another guide on the opposite end of the property, was finding pigs everywhere and having a ball. He alone shot and recovered 9 hogs that night.

We hunted another day and night and were never without action, and ended up with a tally of 26 pigs.

Two final thoughts about the hog hunting at Gopher Plantation.

First, I have chased hogs in a lot of places, from Texas to Florida. The hunting at the Gopher is some of the best I have ever experienced. If you go, spend at least one or two nights thermal hunting.

Second, Ryan and the guys at Gopher don’t just shoot hogs and let them lay, they utilize as much meat as they can. After a hunt when they might have 5-15 hogs in the cooler, if the hunters don’t want the meat, they give away and/or donate as much pork as they can.

We smoked one hog and the chopped pork was great! Jason drove home with 2 huge coolers filled with boned pork, delectable white meat just like you’d see in the grocery store.

The Gopher Plantation in southeast Georgia has some of the best commercial free-range hog hunting anywhere in the U.S. right now. Go to gopherplantation.com for information; call 912-383-2052 to book a hunt.