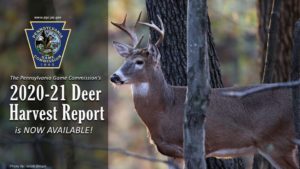 “About a quarter of the state’s deer hunters took a buck in the 2020-21 deer seasons,” noted David Stainbrook, the Game Commission’s Deer and Elk Section supervisor. “It’s a trend that hunters have maintained over the past three license years. The fact that we can maintain such high success rates on bucks year after year demonstrates the sustainability of the deer population in Pennsylvania.”

The percentage of older bucks in the 2020-21 deer harvest remained high. About 64 percent of the bucks taken by hunters were at least 2½ years old. The remainder were 1½ years old.

“The Commonwealth’s antler restrictions have succeeded in providing more older bucks for Pennsylvania’s deer hunters,” said Game Commission Executive Director Bryan Burhans. “In place since 2002, they have transformed the smaller bucks that once dominated our deer harvests into a buck population that is the envy of deer hunters everywhere.

“Anyone who hunted deer before antler restrictions can see the results. But it’s important to recognize that these bucks are a product of a well-managed deer herd and their existence hinged on the willingness of deer hunters to support antler restrictions.”

About 68 percent of the antlerless deer harvest was adult females; button-bucks comprised 17 percent and doe fawns made up 15 percent.

The estimated muzzleloader harvest – 28,260 – was down slightly from the previous year’s harvest of 29,604.