Why One Man Hunts 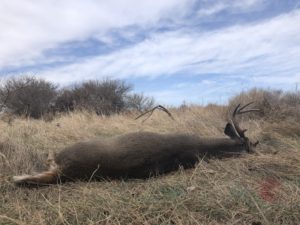 Today’s fantastic guest post is from a bowhunter named Kyle Wright. I don’t know Kyle, but from his writing I take he’s a fairly young man and I know he is a thinking and appreciative hunter. Love your attitude, man.—M.H.

Just saw on your site an article entitled ‘Why Do You Hunt?’ and thought I’d submit my answer to that question. Thanks for reading, Kyle Wright

There is a plot of common ground on every acre of sacred ground we hunt, a common thread woven through every stitch of camouflage in our closets. We come from all walks of life but those walks are all taken in the same pair of broken-in boots.

So, unsolicited, I made the decision after wrapping up another hunting season to speak out on behalf of hunters the world over, in a hushed whisper, of course, to what draws us from the comfort of our beds and lures us into the wild. What follows is one man’s attempted articulation of his connection to the hunt. Inadequate to be sure, but honest, at least.

I move through the predawn stillness, tiptoeing first around forgotten toys in the living room’s floor and then around fallen leaves in the forest’s, feeling my way to the tree stand, inhaling life so real and full my very breath becomes visible. My hopes rise with the sun, and its first rays of light chase away the worries of my world if not the chill in my bones.

Cardinals and blue jays bounce from branch to branch in the cedars below me, blinking like Christmas lights, and every rustle of the leaf littered forest floor sounds like the unwrapping of a gift. Expectancy hangs heavy on the air.

Seven deer filter past my stand this morning, four of them bucks and one of them an absolute monster. Two are busy chasing does and can’t be bothered by me.

The crash of my rattling antlers brings the monster into archery range. He breathes smoke like a dragon, hoarding the treasures of his nontypical rack and tender backstraps, but he never steps from behind the cedar that covers his vitals. When his eyes fail to locate the bucks he’d heard fighting, he melts back into the tree line, bringing a smile to my face instead of a frown and a grateful word of thanks to my lips instead of a curse.

I descend from my perch hours later, never even having stretched the string on my bow and unsuccessful in the eyes of the uninitiated. As true sportsmen will understand, though, every second I’ve spent in these woods has been a triumph. I’ve lived an entire lifetime in the span of a single morning and because of it I’m ready to reenter the world I’d left behind.

Speck of humanity hanging in a tree.

And all within a twenty minutes’ walk of the truck.