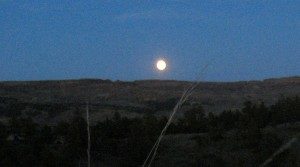 For many years the late, great whitetail behaviorist and hunting expert Charles Alsheimer produced his annual Whitetail Calendar, with predictions on how whitetails would rut each fall based on environmental cues like the light intensity of the moon.

According to Charlie, in a fall like 2021 when you have a full moon in mid-October and another one in mid-November, the pump is primed for a classic “trickle rut.”

Another expert who believes the deer movement will be better than usual this October is my buddy Mark Drury, the television star who films and hunts giants on his Iowa farms.

“I think the ‘October Lull’ will be a better time to see mature bucks on their feet this year because of the full moon on October 20,” he says. “If temperatures are cool, and especially if you get a major cold front in your area, mid-October could be one of the best times to hunt.”

Drury notes there will be a rising moon from 15 October through the 20th, and then a setting moon to follow for 5 days out to October 25. “If it’s cold you better be in a stand these days,” he says. “It’s still October, so most of the daylight buck activity will be around food sources, especially in the afternoons.”

I know many of you typically take off work for a week in November, but if you want to change it up, October 20 through the waning gibbous moon on the 27th wouldn’t be a bad week to try this season.