Bowhunting: How Far to Shoot A Deer 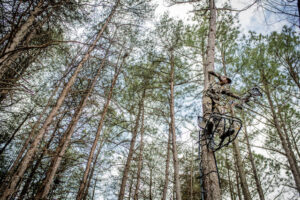 I once read an archery column in a major magazine written by a reputable guy that went like this:

The buck was standing 88 yards away in the cornfield…I drew my bow and released the arrow…struck perfectly in the neck, the buck went right down…

People howled, 88 yards is too damn far with a bow! That was 10 years ago. If the guy had written that today, fewer bowhunters would have protested because as archery technology has advanced light years, longer shots have become more acceptable, especially with Western bowhunters.

But, all hunters would and should still howl about shooting a buck in the neck with an arrow. There is simply no such thing as “struck perfectly in the neck,” whether it’s from 15 yards or 88 yards away. I’m sure the guy was aiming at the buck’s lungs and the arrow drifted into the neck for a damn lucky kill shot.

But back to bowhunting range. Is 88 yards or more too far to shoot at a deer? Or doable for an experienced archer with today’s fast, flat bows and well-tuned arrows and mechanical broadheads?

Expert Western bowhunter and fitness fanatic Cameron Hanes has killed deer and other game at 70-80 yards and beyond and he’s not afraid to say it. “I’ve discovered that killing a bull elk at 70 yards that is standing broadside and feeding is easier than trying to call one in to 30 yards when I have a cameraman with me.”

It should be noted that Hanes regularly practices at extreme range. “I rarely shoot at short distances except when I am sighting a bow in,” he said. “Most of the time, I practice at 100 yards and beyond. Doing so allows me to hone my skills and build my confidence.”

For me, 100 yards is unthinkable, and about twice as far as I’ll shoot at a whitetail. I hunt mainly from a tree stand. I used to preach 35 yards and in, but with one of today’s modern bows in my hands I might push it to 40 if I’ve been shooting a lot and have confidence I can make the shot.

I firmly believe that the majority of people who hunt whitetails from a tree stand should limit their shots to a self-imposed range of 35 to 60 yards. For me, that’s 40 max. For those of you that shoot a fast new bow and practice a lot, you might set your max at 50 or 60. But only if you have a broadside shot at a buck, and the confidence you can put an arrow in his pie-plate vital zone. And leave those 70-80 and even longer shots to Western bowhunters who practice year-round and hunt game mostly from the ground.

I do agree with Hanes and others who encourage you to practice at longer ranges that you’re used to. Once your bow and arrows are well tuned, move targets out to 50, 60, 70 yards and beyond and shoot as much as you can. You won’t take 70-yard shot at a buck this fall, but when he walks by at 30 or 40 that shot will seem a piece of cake.