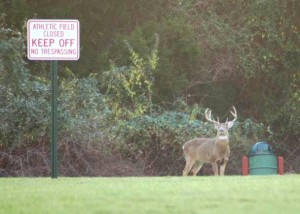 Across America, whitetails are accustomed to seeing and living around houses, roads and people, but they’re still wary animals. Say you’re hunting a small area and catch a buck crossing a trail or gas line between two thickets. If you walk away from the deer, he’ll often continue on his way, watching you out of the corner of his eye. But the second you stop and move toward the buck, he’ll spook and flag away.

Car exhaust, barbecue smoke, barking dogs… Deer that live under our noses put up with all sorts of nasty smells and sounds. But when you step into a small patch of woods to scout or hunt, you’d better be quiet and clean and play the wind or deer will blow and spook.

Here’s the most important thing to remember: Deer learn to tolerate people on the fringes of their habitat. But too much human intrusion inside a suburban buck’s tiny core area will cause him to get leery and turn more nocturnal or, worse, hop over to a secondary cover where the pressure is less intense. You’ll do best by hunting a small property from the outside in, hanging your stands on the edges and letting deer do their thing inside the woods.