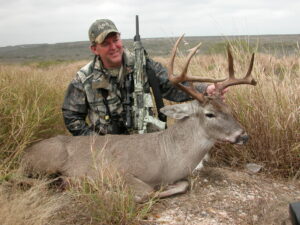 With all the crime and tragedy swirling in America right now–what causes young males do such violent and unspeakable things?–the results of this 2019 study are interesting and relevant.—M.H.

Paul Niekamp, a Ball State economics professor, analyzed daily crime data with statistics from deer hunting seasons spanning 20 years and 21 states for his study, “Good Bang for the Buck: Effects of Rural Gun Use on Crime.”

Niekamp’s study provides the first estimates of the effect of rural recreational gun use on crime. Each year, more than 10 million Americans, comprising 18% of all American gun owners, use firearms to hunt deer during restricted dates.

“The enormous changes in firearm use caused by hunting regulations are unparalleled by any other policy in existence,” he said. “There are no other policies that induce 600,000 Wisconsin males or 530,000 Michigan males to systematically and temporarily carry and use firearms.”

The study found that that there are approximately 12% fewer violent crime incidents on the first two days of firearm season for state agencies in charge of less than 1,000 individuals. Corresponding estimates for agencies covering populations between 1,000 and 50,000 indicate that long gun prevalence is 50%-125% higher, while all estimated effects on violent crime incidents consistently hover around zero.

He cites several reasons deer hunting does not lead to an increase in violent crimes, including:

Hunters may face more regulation than other gun owners. These regulations may improve firearm etiquette and discourage high-risk individuals from hunting.

Survey data show that rural Americans own different guns for different reasons than the population average. Although rural Americans are twice as likely as urban Americans to own a firearm, they are more likely to own long guns used for hunting, protection from animals, and sporting use.

“Another reason that hunters may be a low-risk sample is that patient individuals may select into deer hunting,” Niekamp said. “Deer hunting is often characterized as an activity in which an individual sits in a tree stand for hours on end, waiting for a deer to walk by. It is possible that only patient individuals are willing to participate in this gun-related recreational activity.”

The study also found that alcohol-related arrests of juvenile males fall by 22% and narcotic offenses fall by 15% at the start of hunting season, suggesting that firearm hunting may have positive effects on behavior.

In rural areas, additional recreational opportunities like hunting may assist in keeping juveniles out of trouble, the study found.