Go Mountain Hunting While You Can 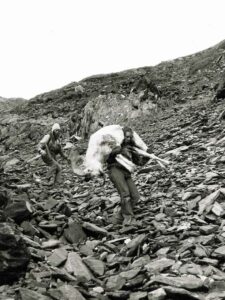 A fellow named Joe heard me say on TV the other day that I used to do a lot of mountain hunting years ago, before I switched over to basically 100% deer. I made the switch because to scratch out a living in the outdoor blogging and television business, you’d better hunt deer, and you’d better write and speak like you know what you are talking about.

“I’m over the hill now, with bad knees and a stiff back, but those hunts I took for sheep and elk back in my day are forever etched in my memory,” Joe said in an email. “In the long run of a hunting career it’s the adventure and the chase, not the prize, that looms large. Young hunters should make the tough hunts while they still can, while they can climb to high, wild, wonderful places. There will be plenty of time later on to sit in a stand and shoot a buck.”

Could not have said it any better myself. Joe got me to thinking back to all the mountain hunts I made earlier in my career, back in the 1980s and 90s when I was writing 3,000-5,000 word adventure stories for magazines like American Hunter and Outdoor Life. Sad, the magazines rarely print those long stories anymore. Anyhow, the memories came flooding back, especially of that first high-country hunt.

I remember that Dall’s sheep hunt in the Wrangell Mountains of Alaska like it was yesterday. It took Melvin, Rick and me 8 hours to hike to the top of the 10,000-foot peak, way above timberline, to where the sheep were grazing. I can almost feel and hear the sweating, the cussing, the rockslides, the falls, the bloody knees and hands. When we finally got up there and sat shivering in our sweat, it took Melvin, in that time one of the top sheep guides in Alaska, about 10 seconds to size up one ram as a shooter, and me about 20 seconds to rest and aim my .30-06 and kill him with one bullet.

The bullet’s whump in the mountain air was loud and unnerving. I can still see blood overspreading the ram’s white shoulder, like you spilled a bottle of Merlot on your best carpet. Then he toppled over dead and rolled violently end over end into a dark crevasse, clattering in the rocks as the gunshot echoed away and the immense mountains fell silent again.

When we got over to the ram 40 minutes later, I stood there in awe and started shaking. Could it be? Did I really kill this magnificent creature? I remember the young horse wrangler, Rick, saying verbatim, “Shit, I ain’t dragging him down these rocks.” He slung the stocky white animal over his shoulder like a sack of corn and took off.

Halfway down the mountain I gave Rick my rifle, hung the ram on my back and took off. I remember the smell of fresh sheep blood, and the feel of the animal’s coarse hide rubbing the back of my neck. I stumbled as far as I could with the load before collapsing in the talus, to prove I was a hard-ass and could do it too. Brutal hunts in big mountains make you do demented things like that.

Four hours later, having run the loose scree off the mountain like riding down an escalator out of control, we arrived back at the horses in the river bottom. I remember Scout bucking and whinnying and giving me the evil eye as Melvin and Rick threw the ram onto his back and lashed it to the pack saddle. “Grizzly bait,” Melvin laughed as Scout reared and twirled and protested more. 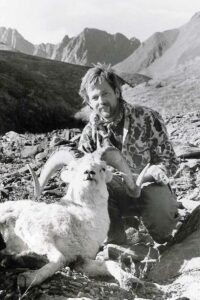 After a 3-hour ride in the blackest night with brightest stars I had ever seen, we made it back to spike camp at 3:00 AM.

“I smell a grizzly, close,” Rick said, and then he hollered, “Go away.”

My eyes bugged and the hair bristled on my neck, but we were so tired we collapsed in our bags. When I woke up 12 hours later, I was still clutching my .30-06.

That was the first of many epic hunts I made for sheep and elk back in the day. Like Joe said, those memories get etched and, thank God, never go away.

I encourage all you 30- and 40-somethings who can swing 20 or 30 grand or so to go sheep hunting in Alaska or maybe the Yukon. Or for less dough, go for a goat in British Columbia, or elk in western Montana. Anywhere the mountains are high and wild, where you have to climb and sweat and cuss and work harder than you ever have just to see game, and if you’re lucky, get a shot. Do it now, before you get too old and regret not doing it.

As for me, I’ve got one creaky knee now, but Aleve can help that. I try to work out every day, and eat pretty good most of the time. I think I could still do it. You old-timers who have aged well and who by now can maybe afford it, pop some pills and go one more time, too.

We’ll all have plenty of time later on to sit in a stand and shoot a buck.