4 Deer Hunting Mistakes And How To Fix Them 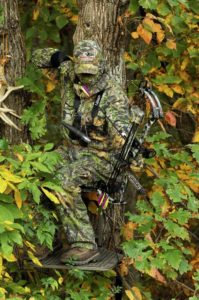 In the last 2 years I have shot over the spine of 2 bucks by dropping my bow and pulling out of the shot too soon. Since I started flinging arrows at hay bales with a recurve too long ago to remember, I have been fighting this glitch. You might struggle with it too. When you release and try to watch your arrow hit a deer, you unwittingly drop your bow arm and lift your head a few inches. Sometimes your rig is so fast and forgiving that you can get away with it. Other times you shoot just over a deer.

Quick Fix: Pick a spot on a deer, draw, release the arrow and don’t move a muscle until you see the shaft zap that spot. Don’t move your bow arm or take your eye out of the peep until the arrow has disappeared and blown through the buck’s off-shoulder. By following through fully, I believe you can actually will your arrow to hit on or near your aiming spot, even if your form is a little off.

One afternoon I spooked a big buck in Kansas by not looking enough. I was sneaking to my stand, pausing every 10 yards to glass the long oak ridge. Convinced the coast was clear, I stepped out into the open and picked up my step—and spooked the 160-class giant that had been browsing less than 150 yards from my stand!

Quick Fix: Once you have finished glassing a ridge or draw, stay put, stand still and look for 2 more minutes. Pick apart every terrain wrinkle, patch of grass, etc. with your binocular. Look low—a lot of times we glass right over deer. Look for movement. You might catch the glint of an antler or hide you missed on your first sweep. Or, a buck might walk out from behind a tree and into sight. You can’t look too much. Had I hunted better and smarter in Kansas, I would have spotted that giant, planned a quick move, knelt beside a tree, nailed the deer with my 7mm RUM and filmed an awesome TV show.

I lost out on another good Kansas buck by being tentative. Sitting in a tree stand on a ridge one morning, I watched deer gliding between the trees in the creek bottom 300 yards below. At 8:00 o’clock, a huge rack moved down there; I surmised the buck was chasing one of the last hot does. Maybe he would come up? I decided to sit and wait—and didn’t see a single deer close. At 9:00 o’clock the big brassy rack glinted in the bottom again, and then he was gone.

Quick Fix: It is a gut decision, and every situation is different. But I believe you are generally better off going for it when you see hot deer activity off in the distance but not much near your stand. This is especially true when you’re gun hunting in the rut. Climb down, get the wind, sneak to a spot with good visibility and set up on the ground. Deer are moving over there for a reason—maybe a hot doe has pulled in several bucks. Get in the middle of the action. Had I quit my stand and sneaked 100 yards closer to the creek, I might have killed that Kansas brute.

I had a nightmare hunt in Illinois a few years back because I did not do my homework. A friend called and asked if I wanted to do a muzzleloader hunt, he’d found an outfitter that was going to cut us a deal. I hollered “Yeah man!” and drew a tag. Next thing I knew it was mid-December and I was standing in the timber, hating life. From the looks of all the tire tracks, boot prints and trash on the ground, the farm I was fixing to hunt had been pounded since the October archery season and on through the early-December shotgun. I hunted three days and never saw a buck. If there were still big deer around, they were scared to death and nocturnal.

Quick Fix: Don’t spend a dime for a guided hunt before doing your research. The most important questions to ask a potential outfitter: How much land do you have? How many hunters do you take? How many other guys will have hunted a spot before I get there? Call at least five of his references, including a couple of people who didn’t shoot a deer, and ask them about the pressure factor. You can put up with marginal accommodations and lousy food if an outfitter has plenty of good ground and above all else limits the hunting pressure.