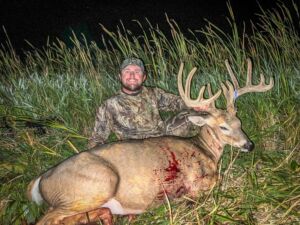 Kyle Olson knew the buck he was looking at on his trail camera. He had several photos of him from the previous year. “The first thing I thought is that he really blew up this year. I bet he put on 40 inches of antler,” Olson said.

Kyle’s bow squeaked as he drew back. “I knew it was now or never,” he said.

His shot was true and the buck ran about 80 yards and crashed. The mainframe 5-by-5 had split brows and two kicker points. The rack had great mass and taped out at 166 ⅞ inches green-score in velvet.

Read the full story at Realtree.com

Kyle’s deer is one of several big velvet bucks I’ve seen hit the ground in North Dakota this September. It’s a bit surprising with the ongoing drought the state has been going through, but the dry habitat and vegetation have not seemed to affect antler development.

Every year certain states are hot for early-season bucks, and this season one of those is North Dakota.