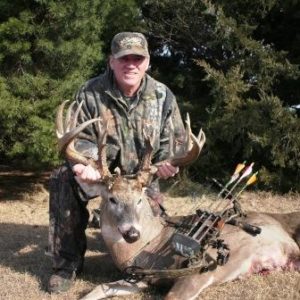 For 7 years Russ Van Zoeren of Twin Lake, Michigan, had traveled to Kansas to bowhunt on public land. November 10 on the 8th year, he fired his first arrow.

After a heat wave with temps in the 80s, storms and a cold front crashed through the night of the 9th. The mercury plummeted into 30s and a northwest wind of 25 shook the leaves off the trees.

Next morning at 8:15, a buck stepped out of a fence row and marched down the same trail Russ had walked on to his tree stand. His brow tines were huge and forked! At 13 yards the giant stopped to smell a scrape that Russ had doctored with hot-doe scent.

The arrow was perfect and the deer didn’t run far.

The 6 ½-year-old animal dressed out at 200 pounds, on the light side for a fully mature Kansas buck. But there was nothing little about that massive rack, which grossed 238 6/8 and netted 229 1/8 non-typical.

Steve Ponte of Newport, Rhode Island, watched a bachelor’s gang of six come and go from woods to a hay field most everyday last August. One buck stood out as the dominant dude. Steve figured him at 150 P&Y points, a shooter anywhere and a true giant for the smallest state in the Nation.

Steve hung tough and kept hunting for weeks. The day after Thanksgiving, he snuck to a stand around 2:30 p.m. He sat down quickly, readied his gear, nocked an arrow, hung up his bow, and even hooked his release to the string. His stand was low, maybe 15 feet. Steve knew he had keep movement to an absolute minimum to keep from spooking any deer that walked close.

He sat like a stone until 4 p.m., when he caught a flash near a stream. He turned his head slowly—a tall-racked buck was close, wading in the water up to his chest. Steve had all of 3 seconds to react. When the buck’s head went behind a fat tree, he stood, plucked his bow off the hanger, and came to full draw in one motion.

The buck popped out the other side of the tree, still coming in. But then he six-sensed something amiss, as big deer are wont to do. The 10-pointer stopped, slowly back-peddled into the stream, and started walking away. Steve had a brief quartering-away shot at 30 yards and he took it. He heard a sickening plop–gut shot?

The buck splashed up the stream and jumped into some cattails. Steve marked the last place he saw him, beside a large swamp oak. He settled down and rethought things. He glassed for his arrow and found it sticking in the stream bank.

He snuck down and checked the arrow. Clean as a whistle, washed by the water. Steve walked upstream and found big footprints in the mud and then splotches of blood.

Doubting the shot now, Steve backed out and gave it a long time. When he returned to the last blood drops, he tracked 20 yards further, looked up and saw a massive rack tilting up in the air!

The shot had been better than he thought. The arrow had entered behind the last rib, pierced the liver and one lung, and exited the off front shoulder.

The whole time, from when Steve had first seen the buck in the steam until when he found him in the oak leaves the next day, he never realized it was the same giant that he had glassed many times earlier in August, but that he hadn’t seen since.

The rack was bigger than Steve had predicted, too. It grossed 176 and netted 166 6/8, one of the biggest bucks ever shot in Rhode Island.

One Saturday morning Kaleb Kisky got up early, pulled on his camo and went bowhunting with his dad, Don, on their Iowa farm. Dawn broke, and it wasn’t long before they heard pop, pop, pop in the leaves. A 10-pointer walked stiff-legged toward their tree stands, paused to rip a scrape and turned broadside at 15 yards. Kaleb drew his bow and sailed an arrow inches over the deer’s back.

The buck hopped off but to Kaleb’s amazement he started circling back toward the scrape! The kid nocked another arrow, took a deep breath and center-punched the lungs this time. The buck fell within 15 yards, and Don caught all the action on video.

A few years ago, Christopher Thomas had a rough month of November. He lost all his personal belongings in a fire, and he lost one of his best friends. To top it off, Chris went out to his west-central Indiana hunting spot on Nov. 19 and found that some slime bag had ripped off his ladder stand.

Chris needed some time to hunt and clear his head, so he said to heck with it and plopped down beside a tree close to where his stand had been. Soon a gang of drive hunters traipsed through the area! What else could go wrong? 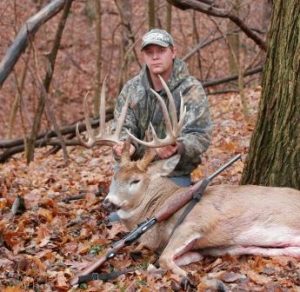 Chris hung tough and a group of does came along at midday, followed by giant. Chris rolled him with a slug and couldn’t believe how his luck had changed—the buck scored 198 3/8 non-typical.

Way to go Chris, you deserved it man.

Georgia hunter Brian Wilson traveled thousands of miles to northern Saskatchewan to spend a week in the land of the giants. On November 6, five minutes into his ground-blind hunt, Brian smoked a fantastic 13-pointer with heavy mass and stickers. The gnarly, black-beamed stud grossed 185!

Brian LaRue cut out of work early one November 22. The rut was still on in Winneshiek Co., Iowa, and he was pumped. Brian sneaked toward his favorite stand in a walnut tree, even though the northwest wind would be wrong there. But when he got to the stand bingo! The wind was straight west, okay for deer movement in the area, so he climbed up. He looked down and noticed a big, fresh rub at the base of his stand. 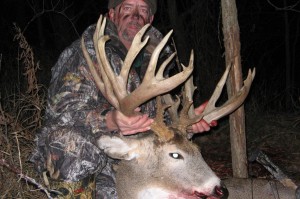 The monster skulked toward Brian’s stand, stopped 60 yards out, and mauled a tree. Brian used the break to ready his bow and calm his nerves. The brute stopped rubbing and bore for the walnut, curving off to the side, sliding by at a tough angle. Brian panned with the deer, leaned out and around the tree and let an arrow fly. Brian is convinced the deer was going for the rub below the stand when he killed him at 4:22 p.m.

Tale of the tape: The 22-pointer’s rack had a 30-inch outside spread, gross-scored 237 2/8 and netted of 221 4/8. Brian figures the buck was 4½ and weighed 165 pounds. Sometimes due to weird genetics mature bucks don’t weigh all that much. Plus, this brute had shed some pounds chasing and breeding does for the last few weeks.

On November 21 the next year, Brian left work and went back to the same walnut stand. Around 4:15 p.m. he spotted a couple of does. He caught a flash—a shooter bore for the girls! Just then a fork-horn walked under the walnut tree—the big boy turned and beelined for the little guy. Brian cut him off with an arrow, almost to the minute of when he had killed his 221-inch monster the year before. This buck was smaller—20 inches wide and 160-class!