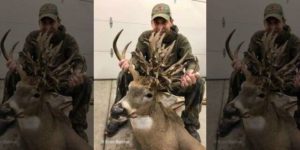 WICHITA – Kansas bowhunter, Brian Butcher, 38, harvested a whitetail buck in Chase County last October that he knew was something special. It wasn’t until the buck’s rack was measured by Boone and Crockett Club certified measurers on Friday, Jan. 3 that Butcher confirmed just how special the deer was.

“When I first saw it, I thought it had some branches or grass tangled up in its antlers,” said Butcher. “But when I looked at him with binoculars, I realized it was all antlers.”

Butcher released his arrow when the giant buck was just 25 yards from his treestand and the shot was true. After waiting only 5-10 minutes, Butcher tracked the deer to a spot 50 yards away.

“I had the most opposite feeling of ‘ground shrinkage’ possible,” Butcher said of the big whitetail with 67 scorable points. “I was in complete shock.”

After sharing photos of the buck with friend Brian Crowe, the duo got together and attempted to score the deer.

“We added it up five times because it didn’t make sense,” Butcher laughed. “We had it at 341 inches gross, and 316 inches net.” 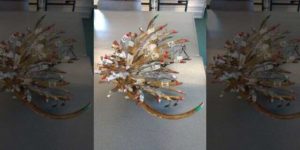 According to Boone and Crockett guidelines, the rack could not be officially measured until it had dried for at least 60 days. On January 3, Boone and Crockett measurers Marc Murrell, Newton, and Ken Witt, Burleson, Tex., took on what would become a nearly five-hour-long task of scoring the deer. Murrell and Witt came up with a pending net non-typical score of 321 3/8 inches.

If it stands, Butcher’s buck will rank fourth in the world of non-typical whitetails.

For more on the Boone and Crockett Club, visit www.boone-crockett.org/.