Will COVID-19 Lead To More Deer Hunters This Fall? 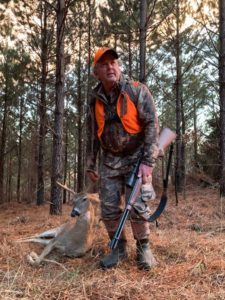 Wildlife officials in Tennessee note that hunters flocked to the turkey woods in big numbers this past spring when life as we knew it shut down due to the pandemic, which left people out of work and looking for something to do. Fishermen followed suit and converged on Tennessee lakes and rivers this summer, too.

The number of people in the state who purchased hunting and fishing licenses has risen by nearly 20 percent so far this year as compared to 2019.

With the pandemic lingering into late summer and fall, TWRA officials believe a similar scenario could play out when deer seasons open.

“The pandemic is still going on and we imagine people still have a lot of free time on their hands,” TWRA spokesperson Barry Cross said. “If it plays out the way it has over the summer, people are looking for something to do. If they’ve ever hunted before, odds are they’ll be back. If they’ve hunted and just haven’t been back in a while, they may come back, and we’re hoping we’ll be able to introduce some people to deer hunting for the first time.”

I believe there will be an increase in deer hunter numbers in Tennessee and most other whitetail states in 2020, though I don’t expect the numbers to be as high as many state officials hope and predict.

As I wrote in a recent Realtree blog:

Back in May I predicted there would be a huge surge in the number of deer hunters for two main reasons. More spare time, for sure. But remember the food and meat shortages back then, and worries about disruptions in the supply chain? I expected the locavore/foodie movement to really take off in the woods as people concerned about their food source would look to shoot a deer or two for the freezer this fall.

Now the fear of meat shortages has subsided, and that will temper the surge in hunter numbers that I had predicted.

Also, I should add that hunting a deer is much harder than turkey hunting or fishing. From finding a good place to hunt, to the gear you need, to the end game of shooting and deer and gutting it and getting it out of the woods and into the freezer, deer hunting is much tougher than getting a big bird or catching a stringer of bass.

There will be more hunters in the woods this fall, both newbies and reactivated sportsmen (some people who used to hunt deer but stopped will have more time to give it another go). How many more hunters remains to be seen, but even a 2% to 5% uptick in license sales would be good. Hunter numbers have been declining rapidly in recent years, and we need all the new people we can get to buy licenses.

To that end, Tennessee officials note that the revenue from the spring/summer surge in turkey and fishing license sales increased $3 million over the same time in 2019!

If we can match that and more in most whitetail states across the nation this fall, that will be the best thing that has happened to hunting and wildlife conservation in many years.

One little silver lining to this horrible pandemic.