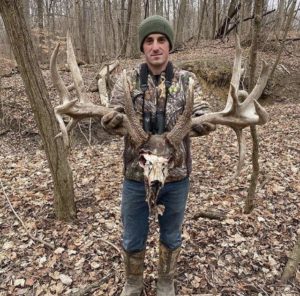 A couple of days ago a guy on Twitter posted this photo, and it broke the hunting Internet. I’ve now seen it Tweeted dozens of times and it’s all over Facebook and Instagram as well.

From what I can piece together, hunter Jason Kline found the massive deadhead about a week ago on a big tract in northwest Ohio (not high fence) that doesn’t allow any actual hunting, although Jason does have permission to look for sheds there.

As you might expect, a buck like this was no secret. People and hunters in the area knew the big deer and had named him Herman. Trail camera pictures of Herman have since showed up online.

Nobody knows how the massive buck died.

Everything about this rack is incredible, including the drop tines, but what strikes me most is the world-class mass, especially at the bases. Big as beer cans!

Jason figures the rack will score over 220 inches.

This is not the first ginormous Ohio deadhead that we have posted on Big Deer. In fact, we know of one that outscores Herman’s rack by 30 inches and might have bested it by 50 inches had it been found sooner.

In April 2014, hunter Drew Wisecup sent this picture of a tremendous buck he had been hunting for 3 years.

“A truly remarkable animal that we called Moose,” Drew wrote. “Unfortunately, Moose died due to another bowhunter’s mistake (not mine) and we recovered his body and antlers this spring.”

Drew says the rack was scored at 252 1/8″ and that “was after squirrels had chewed off 20 inches during the winter.” Scorers think it might have been the 6th overall biggest buck to be picked up or harvested by any means in Ohio. 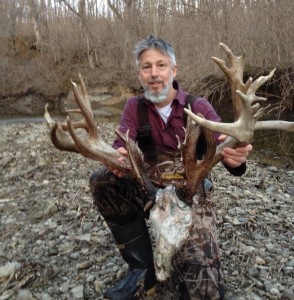