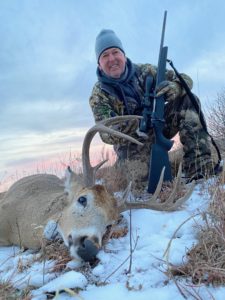 I have shot a lot of game over the years with the .30-06—sheep, bears, elk, caribou, mule deer and too many whitetails to count. But I hadn’t hunted with the  venerable cartridge for at least 10 years. Recently I’d killed my bucks with rifles chambered for .270, .35-Rem., 7mm Mag and others.

I am proud to announce that last November, CZ-USA came aboard as the exclusive firearms sponsor of BIG DEER TV, and they sent me a Model 557 Eclipse chambered for .30-06.

Great, but what about ammo? I went to my gun shop and owner Steve laughed and said, “You want some ’06? Man, we haven’t had any of that for months. You won’t find a box within 500 miles of here.”

I went home and dug through my stash of old ammo in the basement, and the first box of .30-06 I came to was Federal Premium Trophy Bonded 165-grain. Hmm, killed a lot of cool stuff with this load back in the day, I recalled as my mind wandered back to beautiful memories.

The box was light, not full, with only 10 silver, still shiny cartridges in the orange sleeve. I figure those rounds were at least 20 years old. I pulled each round out and checked it thoroughly, a must before you shoot old ammunition. They looked fine.

Ten bullets. Should do it if I planned well and conserved.

I topped the CZ with a new Trijicon Huron 3X-9X scope, bore sighted and went to the range. I allocated 3 cartridges to the sight-in job and hoped that would do it. 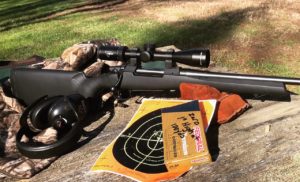 After the first 2 shots, my new rig was shooting dead-nuts on, 1 inch high at 100, right where the deer hunter needs it. I went ahead and fired the third shot to confirm things. Perfect, good to go!

I hit the road with my rifle and 7 bullets.

One day in mid-December out in the Texas Panhandle, I went to the makeshift range behind the barn on the property I was hunting. As I set up on the wobbly, rotting bench in the whipping wind, I got a little nervous.

I had allocated one bullet to confirm zero at each of the 3 late-season destinations I’d hunt. That would leave 3 bullets to kill 3 bucks, with one cartridge left over just in case.

I settled the CZ into some rolled up camo coats and fired. Inch and a half high, dead over the bull.

Two days later, at dusk, an old 8-pointer stepped out of a ditch one the open plains, 170 yards from my ground blind. The wind was whipping a good 20 mph so I put the crosshair on the buck’s shoulder, moved it back a bit to compensate for drift and pressed the trigger. 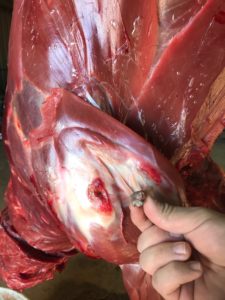 The whump was shockingly loud and the buck (top picture) went down. High shoulder, the wind had pushed the bullet several inches to the left, just as I had hoped.

On to central Louisiana with 5 bullets left, and high hopes. Mid-January 2021, and the peak rut was still on. I’d heard the well-managed property I was hunting, low-fence of course, had some huge-bodied bucks, 250 to even 300 pounds, descendants of Wisconsin bucks transplanted to the area some 50 years ago.

I arrived and fired my confirm-zero shot, dead on. Four bullets left.

Three days later, a 6-year-old bull of an 8-pointer marched out of the woods and approached to within 70 yards downwind of the doe decoy I had staked in the food plot. I had experimented with decoys many times before, but had never had a buck work in perfectly like this. 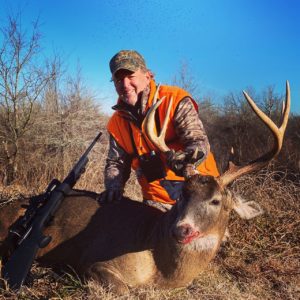 I fired and the deer ran off, rack high, wide and heavy going away. It was all young guide Cole and I could do to wrestle the 250-pound animal and lift him into the bed of the UTV. My best buck of the year.

On to the Hill Country of Texas for the last hunt of the year. Three bullets left.

I met up with Jason Morton, VP of Marketing for CZ-USA, at a shooting range in Ulvade. He coolly fired one shot with his CZ rifle in 6.5 Grendel, a cartridge Jason loves. The Hornady 123-grain bullet cut the bullseye 100 yards away. I set up and chambered my one confirming round. Pressure was on.

From a ground blind one evening last week, I glassed 10 bucks and took their measurements. Gotta love Texas! I was hunting for a management buck, an 8- or 9-pointer at least 4½ years old. Most of the bucks I looked at were too young, and a couple of 10-pointers were too darn big. Then what I call a “slick 8” stepped out of the scrub brush. Main-frame 8-pointer with no brow tines. Thick and heavy body and brisket, mature, a shooter.

Boom! Hit high in the shoulder, the buck crashed down into the sandy sendero. The boys came to pick me up at dark, with Jason’s heavy-horned 8-pointer strapped to the back rack of the Suburban. Five year old buck with a character rack. 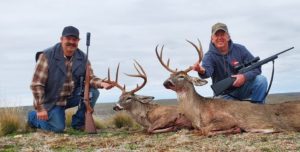 What an afternoon! Back at the lodge, Jason and I toasted our bucks with sipping whiskey and cigars. I reached into my pocket, pulled out my one last silver cartridge and rolled it in my hand.

Watch all 3 of these great hunts on Season 10 of BIG DEER TV coming summer 2021 on Sportsman Channel.