Right now we’re in the middle of a 3-week road trip filming for Season 12 of Big Deer TV on Sportsman Channel. I wanted to share a few photos with this update: 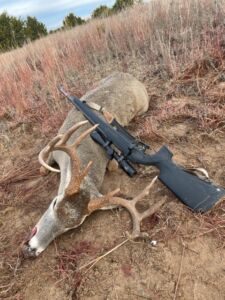 I kicked things off in northwestern Oklahoma by shooting this beautiful 10-pointer (4.5 years old) with thick antler bases. He was pushing does all over the place and I finally stopped him with a loud eck and killed him with one 150-grain Hornady SST bullet. Rifle is the great new CZ model 600, mine in old-school .30-06, topped with the great Trijicon Huron 3X-9X by 40mm scope.

Next up was my friend John Trull of Trijicon, who for several days hunted a wary and nocturnal buck named “Phantom.” John had a close encounter with the 6 year old deer last Monday night, but ran out of filming light before he could close the deal. Next evening just before dark, the Phantom tripped up and came in downwind to scent-check the fool plot for does, and John killed him with one perfectly placed 150-grain Hornady Interlock. We taped Phantom’s rack at 155″.

Ace Cameraman Christian Hoffman and I packed up and drove 4.5 hours to Chanute, Kansas. For 2 years running I had failed to draw a KS tag, but I got one this year and was hoping to make it count. 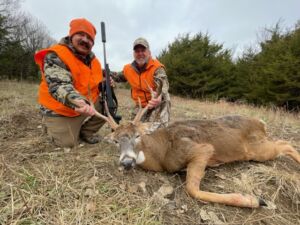 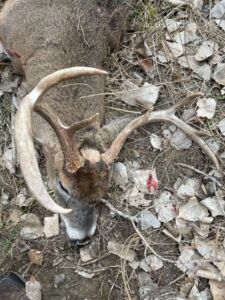 But first up was my buddy Jason Morton of CZ-USA who was hoping to shoot a buck with his new Model 600 in 6.5 PRC. On the third day of his hunt, he shot an amazing deer–this wild 7-pointer that we know from trail cam history is at least 8.5 years old and possibly 10 (see picture left, the old deer is skin and bones and might not have survived another stressful winter). I checked his bottom jaw, all gums except for one molar way in the back. But wait there’s more! When Jason picked up the deer’s head for the first time, he noticed a 3rd antler, big as a silver dollar and hard and concave like a little saucer, in between the antler bases! Biologists tell me the buck likely suffered an injury to one of his main velvet antlers/pedicles last spring, and that likely caused the saucer antler. 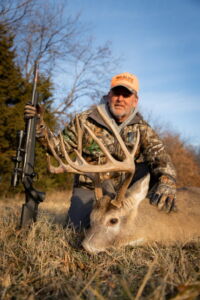 I don’t want to give too much away, but later in the week I tagged one of the best bucks I’ve killed in years. This Kansas giant scores in the mid-160s and has as much flair as any rack I’ve gotten in my 30-plus-year hunting career. Now it’s on to Indiana, where there’s been too much rain lately and is not nearly as cold as I had hoped for. I’ll hunt hard as I can, and see if I can keep the hot streak going.